Monks On The March 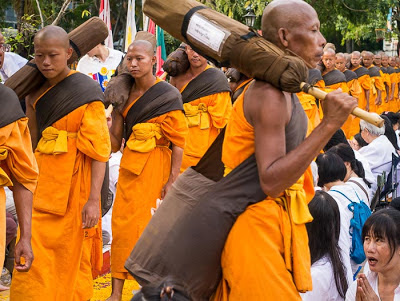 Buddhist monks walk through Surasakmontri School during their pilgrimage through Bangkok.

More than 1,100 Buddhist monks, most from the Dhammakaya Movement, will complete a mass pilgrimage through Bangkok and central Thailand later today. I photographed them during Saturday's leg of the pilgrimage. Thai Buddhists lined the route of the pilgrimage and sprinkled the path with marigold blossoms, which the monks walked over in a long single file. As the monks passed, people scooped up the blossoms as mementos of the day.

As interesting as the pilgrimage was though, for me the best part of the morning was being among the monks as they broke their camp at the school where they spent the night.

More after the jump... 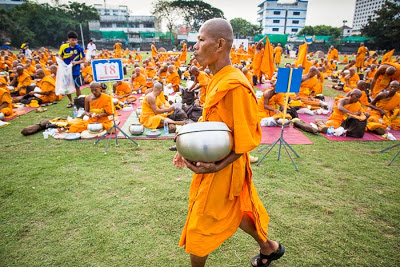 A monk carries his bowl through camp before leaving on Saturday's leg of the pilgrimage.

There are lots of temples and lots of monks in Bangkok, especially in the old part of the city. I usually see and photograph them in their "official" settings in the temples or performing rituals in public spaces.  I haven't photographed many monks relaxing or in an informal setting. Saturday was a great exception to the rule. 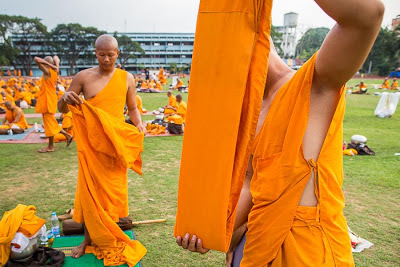 Monks pack up before the pilgrimage.

The pilgrimage was supposed to start at 8:30AM.

I wasn't 100% sure of where I was going and what access would be, so I planned to arrive early. I wanted to get to the school where the pilgrimage was to start by 7:45AM. I got there about 7:15, early even by my standards.

I photographed a morning service which was just starting and then wandered around the school. I ended up back on the athletic fields where the monks had spent the night. 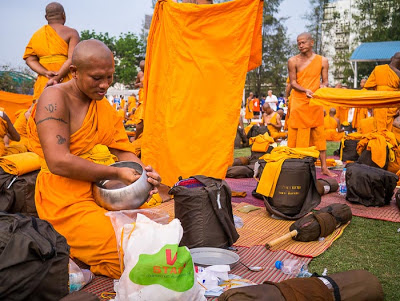 A monk cleans out his alms bowl while his brethren pack.

They were breaking camp, packing their few possessions, taking down their tents and generally preparing for the long march ahead. I walked into the sea of saffron robes and through sign language asked if I could photograph. A monk replied by asking me, in perfect English, where I was from. I photographed him while we talked about Thailand, the situation in the south and the role of Buddhism in the Kingdom. I thanked him after a few minutes and moved on. 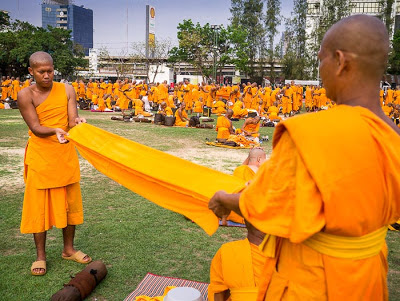 Monks help each other fold their robes before setting out Saturday.

I walked down a line of monks and another asked me where I was from (that question is the universal ice breaker in Thailand). I told him Arizona and he told me had a brother with a Thai restaurant in Atlanta. I told him Atlanta was a long ways from Arizona but that I had a sister in Atlanta. He just looked at me and asked if I was from Phoenix or Tucson. I felt a little chagrined but kept right on photographing while we talked about Thailand. 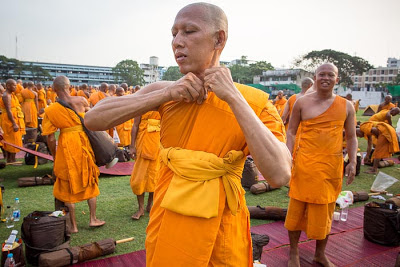 Final preparations before setting out.

The light was beautiful, the monks were gracious and their orange robes catnip to the camera. It was a great morning.

There are more photos from the pilgrimage in my archive or available from ZUMA Press. A couple of the photos made ZUMA's Photos of the Day Blog.
Finally, most of the photos in my archive are available for editorial use or self fulfillment as prints. If you see something you'd like to use or just hang on the wall, click on the "Add to Cart" button and follow the onscreen prompts.