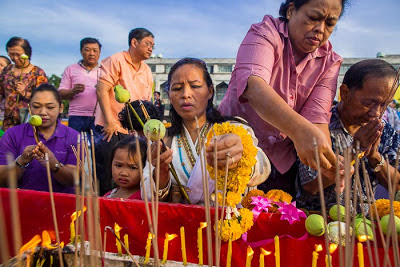 On New Year's Day, Thais light incense and pray at a shrine during a merit making ceremony in front of Bangkok's City Hall building, which is in the far background.

Thais' frequently go to temples and shrines on New Year's Day to "make merit" for the coming year. Merit making is the Theravada Buddhist concept that the act of giving assistance and comfort to others will in turn help you overcome life's obstacles. It seems to me like a good way to live your life.

I wanted to photograph some of the merit making. I left my apartment early to go to a couple of temples. My plan was to make a sort of circular route to Wat Saket, Wat Suthat and finish up at Wat Hua Lamphong, all popular, important, temples. When I got in the taxi I made a spur of the moment to decision to start at Wat Hua Lamphong and go in the reverse order.

Wat Hua Lamphong was empty, not a very lucky start to the day. There were no crowds and nothing was happening, I flagged a second taxi and headed over to Wat Suthat. We got caught in traffic around Bangkok City Hall (which is across the street from the Wat) and I saw there was a large merit making ceremony with a massed Tak Bat (alms giving for monks) going on. The traffic was from the people going to and leaving the merit making ceremony. I paid off the cabbie and hopped out. 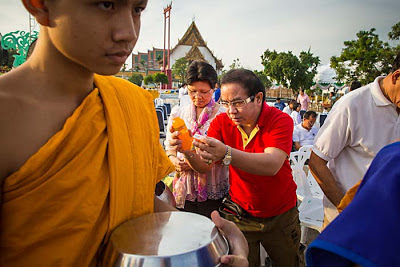 A man presents orange juice to monks during a merit making ceremony at Bangkok City Hall. The roof of Wat Suthat is in the background.

As luck would have it, I stumbled into the largest New Year's Day merit making ceremony in Bangkok. I photographed people praying at a shrine in front of City Hall, presenting alms to the monks and receiving blessings from the monks. There was a crowd of Thai photojournalists there but I was the only farang (Thai for foreigner, usually Westerner) there.

The tak bat and prayers were done in silence, the soundtrack was provided by the monks' rhythmic chanting in the bless ceremony.

After the ceremony ended I walked across the street to Wat Suthat where people were making merit and receiving blessings from the monks.

I made some more photos in the temple. Pictures of people praying in front of the wihan or main prayer hall. Then I slipped off my shoes (it is customary to remove shoes before entering Thai homes and temples) and went into the main hall where people were receiving blessings from the monks. 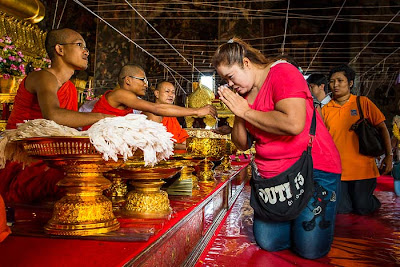 People receive blessings from the monks at Wat Suthat.

I made a few more photos at the temple. I had more than enough photos from the merit making ceremony at City Hall and in Wat Suthat so I headed back to my apartment to edit.

And my luck continued. Traffic was light and I found a taxi in just a few seconds. My normal practice is take a taxi to the nearest Skytrain station and take the train home. Traffic was nonexistent and I was delivered to the Skytrain station in a fraction of the time it usually takes to reach the station.

Bangkok's Skytrain is usually packed and riding the train means standing. This was no usual day though, it was my lucky day. Like the roads, the trains were empty and I was delivered to my home BTS station in seated comfort.

In the west, thirteen is thought to be an unlucky number. But my 2013 started out with great luck. Here's to hoping the luck continues!

There are more photos from the day's merit making in my archive and available from ZUMA Press.


Finally, most of the photos in my archive are available for editorial use or self fulfillment as prints. If you see something you'd like to use or just hang on the wall, click on the "Add to Cart" button and follow the onscreen prompts.
Posted by Jack at 21:37