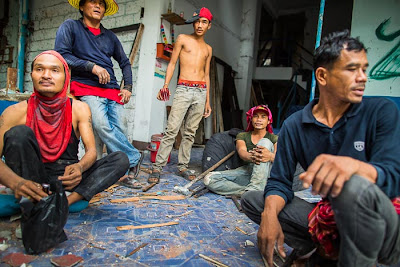 Workers kick back at the end of their day tearing down the buildings in Washington Square in Bangkok.

I've been photographing demolition workers in the old Washington Square district of Bangkok, a mini project of sorts, for the last few weeks. It's interesting to me because you used to see "Washington Square" used with "infamous" on a pretty regular basis. The area has been featured in a series of "Bangkok Noir" mysteries (there's a whole genre of fiction dedicated to foreigners dying in the City of Angels).

The square used to be home to a small cadre of American, British and Australian ex-patriots, all men, all older, most veterans of various Southeast Asian wars. Most of the businesses were bars and / or brothels, cabarets or travel agents (because in Thailand eventually everyone needs a travel agent). There were even a couple of legitimate and, by all accounts, very good western restaurants in the Square. 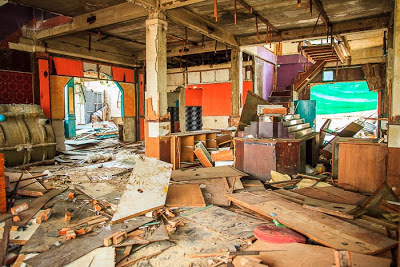 Inside Bourbon Street, at one time one of the most popular American restaurants in Bangkok.

Bourbon Street was a Cajun place famous for its Thanksgiving buffets and popular with Americans yearning for American cooking and the Dubliner, an Irish pub that always packed. Sadly they too are gone.

I never saw Washington Square in its heyday. I discovered it by accident a couple of months ago when I read a satirical story about the Square's demolition. It was just a couple of blocks from my apartment so I walked down to check it out. It was pretty much what I expected - a bunch of decayed old buildings. I made a few photos of the closed building and went on to another part of town. It was convenient because Washington Square was on my way to the Skytrain stop near my apartment.

On my second visit to the Square I saw tents set up in the buildings that were to be demolished. I hung around some and photographed the workers and came to the realization that the demolition workers were living in the old bars and brothels while they dismantled the Square.

In this case, dismantle is a better word than demolish. There is old school demolition going on - heavy equipment is being used to knock down some of the buildings. But before the heavy equipment gets to a building, workers go through each building taking it apart piece by piece using their hands and hand tools. 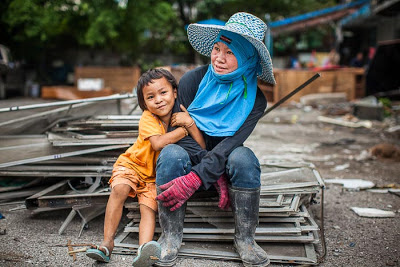 A girl rests with her mother at the end of the workday.

But what's more amazing is the workers' living conditions. The demolition workers live in the old buildings while they take them down. They cook their meals on charcoal or gas stoves in front of the buildings. They sleep in tents or mosquito nets set up in the buildings. Their children play in the Square, amidst the piles of construction materials waiting to be recycled.

The workers' reaction to me was interesting. Everyone of them, without exception, was gracious to a fault and allowed me into their lives and homes to photograph them. I went back one time with a Thai friend who explained to the people I had been photographing that I was journalist and that I found what they were doing and how they lived interesting. That simple statement seemed to answer a lot of questions they had about why I was doing what I was doing.

Construction and destruction work is dangerous. Workers are in unstable buildings, using cutting and welding torches, there are nails and broken glass littered everywhere. These Thai workers, men and women alike, work without the benefit of hard hats or goggles, most without gloves or boots. 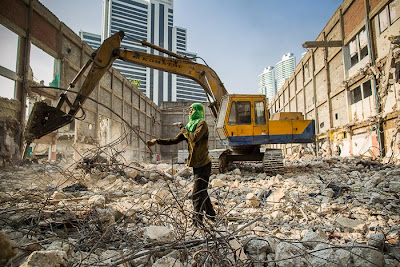 A worker looks for rebar to recycle. His "safety" gear is long sleeves, and a tee shirt wrapped around his head.

They get up in the morning, put on their jeans and tee shirts and walk the 50 feet to work. Some work in tennis shoes. Others in flip-flops. Only a few have hard hats. The ones that do provide their own. Nobody had eye protection. Not the men using cutting torches, not the ones smashing walls with hammers. Not the ones pulling out windows. None. It's something to watch and it makes you appreciate the worker safety standards we take for granted in the United States.

The photos I made in Washington Square were made over a period of of weeks. I'm going to be away from Bangkok for a bit and not able to get back to the Square and workers have some time off over the New Year, so I thought I would write this up now. I will probably go back to Washington Square after the New Year and photograph the last couple of weeks of the Square's demolition.

There are more photos of Washington Square in my archive or available from ZUMA Press.

Finally, most of the photos in my archive are available for editorial use or self fulfillment as prints. If you see something you'd like to use or just hang on the wall, click on the "Add to Cart" button and follow the onscreen prompts.
Posted by Jack at 01:20