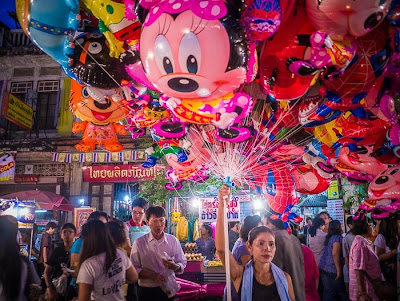 A balloon vender at the Wat Saket Temple Fair in the old part of Bangkok.

I started out today checking out the places I wanted to go to photograph Loy Krathong, a Thai holiday that is one of the happiest, most photogenic days in Thailand. I took a khlong boat out to the end of the route on Khlong Saen Saeb, where there's a lovely temple. With a friendly group of monks. 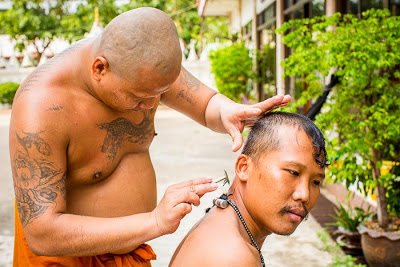 A monk gives one of his brethren a shave and hair cut at Wat Sri Boonreung, at the end of the boat route on Khlong Saen Saeb.

When I finished checking out the temple, I climbed back into the khlong boat and rode to the other end of the line, at Phan Fa, a historic bridge that at one time was the extent of imperial Bangkok. As the boat pulled into the pier at Phan Fa, I saw the chedi of Wat Saket was wrapped with a huge red cloth and the streets leading up to the temple were clogged with food carts.

That could mean only one thing: it was time for the annual temple fair.

Every Thai temple has an annual fair, much like a church fair in the US. There's food, games of chance, rides and a midway. It's really more like a small county fair than a church fair. And Wat Saket's fair is reputed to be one of the best in Bangkok. All of a sudden it didn't feel like I was carrying the cameras for no reason. I made a few photos at the beginning of the boat line, but I mostly had the cameras with me "just in case." I didn't leave my apartment with an itinerary that included photography.

I walked the 100 meters to Wat Saket and started photographing the people at the temple fair.

Wat Saket has an interesting history. It's built on a small hill. When it was built, King Rama I (the first king of the Chakri dynasty) ordered that the chedi be the tallest point in Siam's new capital city. So a tall manmade hill was built for the chedi, which towered over the rest of Bangkok for centuries, until the post World War II building boom changed the city's skyline forever. Now dozens of skyscrapers tower over Wat Saket. It also served as the city's cemetery during a plague epidemic in the early 1800's. Thousands of people are reportedly buried in the temple's hill.

I was working mostly with my 5D Mark III, and when I filled a 16 gigabyte Compact Flash card, I decided it was time to slow down a bit. That was more than 500 photos and it was getting dark. So I switched to using my Lumix GX1, a terrific little camera but not the best choice for night time photography because its small sensor is not as good for high ISO work as the Canons are.

But I had not counted on two things in GX1's favor: 1) it is a lot of fun to work with. It's small size and relative light weight, make it a terrific street photography camera and its lenses are very sharp. The 20mm and 45mm lenses in particular are nearly as sharp as the Canon L series lenses. 2) while it was dark out, there was a lot of ambient light from the street lights, the rides and the vendors' carts. So it was easy to use ISO 400 and 800 and the GX1 does great at those ISO's.

So I started photographing with the GX1. In what seemed no time at all, I filled one Secure Digital card. Also 16 gigabytes, but since the GX1 files are smaller than the 5D Mark III files, it meant there were a lot more pictures on the card. At this point, I tossed caution to the wind and just popped in another card and continued to photograph. It was too visually rich to pass up and I didn't know when I would get to another temple fair. (Their scheduled on a lunar calendar and usually only locals know about them.)

I ended up completely filling two 16gig cards (one CF from the Canon 5D Mark III and one SD card from the GX1) and the better part of a second card. In a day when I set out to photograph anything, I ended up photographing well over 32 gigabytes worth of data. It's one of the things I love about Bangkok. No matter where you are, you're just around the corner from a rich visual environment. (In the slide show, the photos from the GX1 are the squarer photos with room on the left and right hand sides of the frame, the 5D Mark III photos fill the frame of the slide show.)

There are more photos from Wat Saket in my archive.

Finally, most of the photos in my archive are available for either editorial licensing or self fulfillment as prints. If you see something you like, click on the "Add to Cart" button and follow the onscreen prompts.
Posted by Jack at 10:30