To Olé or not to Olé 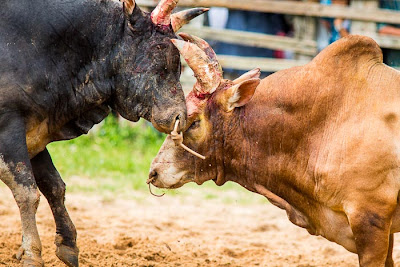 Bulls do battle in the bull fighting arena in Hat Yai. Thai bullfights are bull vs bull. No matadors, no swords and not much blood.

I went to the bullfights in Hat Yai Saturday. It was my first Thai bullfight and it was something I've been trying to photograph for years, but my schedule and the bullfighting schedule never got into synch.

It was interesting and the people watching was a lot of fun. Thais bet on bullfights. (They also bet on cockfights, fish fights and cricket fights.) In fact, they bet a lot on bullfights. The totals wagered on one of the fights Saturday was about 4,000,000 Baht (that's four million), about $128,000 (US). Not much in terms of the Super Bowl, but a lot for rural Thailand and a lot for one fight.

There's ritual connected to Thai bullfighting. The bulls are washed down and anointed before the fight. The bulls wear decorative necklaces and lassos. They are paraded into the ring with a team of people who tend to their every need.

During the fight they are encouraged (from a distance) by team members calling to them and tossing their ropes toward them. But there are no whips and the bulls are not hit. I know it's seems incongruous, but the animals are well cared for and live to be 20 or more years old. One of the bulls fighting Saturday was 15 years old.

The bulls choose to fight or not to fight. In fact, most of Saturday's fights were very brief. The bulls meet in the arena, head butt each other a couple of times and one of the bulls turns around and trots away.

Catcalls and booing ensue from the spectators and if the bull can't be shamed back into battle the match is called. During Saturday's fights I didn't see any bulls change their minds. Once a bull decided this wasn't what he wanted to do on a nice Saturday afternoon the fight was over.

Which brings us back to the 4,000,000B wagered on one fight. The Thai man I went to the fights with told me 2,000,000B was bet on each bull in the final bout of the day. It was also the shortest. The bulls met in the center of the arena and the loser turned and ran. He didn't trot off, he ran. At some point in his career he must have done well to get people to drop 2,000,000B on him, but this wasn't his day.

The fight wasn't much to watch but the crowd was. The losers were incensed that their bull chickened out. There were catcalls and boos a plenty.

None of them worked. The bull stood his ground by refusing to stand his ground. In a matter of seconds, 2,000,000B was lost.

I don't gamble and I especially don't gamble when 1) I have no idea what the rules are and 2) I don't speak the language of the bookies.

The betting at Thai bullfights is fast and furious. The betting starts as soon as the fight is announced - days or weeks before the actual bullfight - and continues right up to the end. I didn't even pretend to understand it. But I had a good time and I will probably go to a bullfight the next time I'm in Hat Yai.

There are more photos from the bullfight in my archive.


Most of the photos in my archive are available for licensing for editorial use or self fulfillment for prints if you'd like to hang one on the wall, just click on the "Add to Cart" button and follow the on screen prompts.
Posted by Jack at 04:15