Rowing for the King 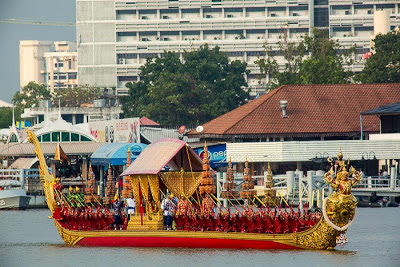 The Royal Barge Narai Song Suban is propelled down the Chao Phraya River during the final dress rehearsal for the Royal Barge procession.

The Royal Barge Procession is Friday, November 9. It's a special day, a very important one for the Thais. This is a full procession of the barges. Full processions of the barges is a rare event - there have only been 16 during the reign of Rama IX, King Bhumibol Adulyadej. The river bank will be lined with thousands of well wishers, most wearing yellow (the King's color). The King's eldest son, Crown Prince Maha Vajiralongkorn, the heir apparent to the crown, will preside over the procession.

I didn't get down to the river early enough. I naively thought the river taxis and ferries would be running (because even then I knew the best view would be from the west side of the river) but they weren't because the procession shut down river traffic. And I didn't bring a long enough lens with me to the river. I knew the barges would be in the middle of the river and I would be on shore, but I thought my 200mm lens and 1.4X teleconverter would be long enough (effectively a 280mm lens) but I was wrong.

The pictures from the first rehearsal were okay but not what I was hoping for. They would have been better from the west side of the river with a longer lens.

Because I learn from my mistakes, things went much better the second time. First of all, I got great tickets from a friend at the Tourism Authority of Thailand. Grandstand seats at the Royal Navy Convention Hall on the west side of the river very close to the end of the procession, exactly where I wanted to be. 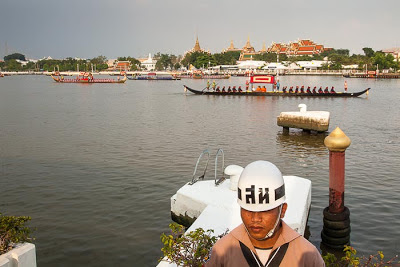 A semi wide angle view of the procession passing me. A Thai navy sailor guarding the river front while the barges pass. The roofline in the background is the Grand Palace complex. Made with a 28-70 zoom, an old lens I seldom use.

I left much earlier for the rehearsal. It says something about Bangkok traffic that I left at noon for a 2PM event. It was about 6 miles from where I flagged my cab to the Convention Hall. I got to the Convention Hall at 1:30PM. Ninety minutes to go six miles in city traffic. To be fair, under normal circumstances it would have taken half the time because I would have taxied to the river and taken a ferry across the river bypassing half the traffic but still.

I don't normally use zooms, but for this event I brought zooms with me instead of primes.

I switched to prime lenses many years ago, but I kept my zooms specifically for events like this. I haven't updated my zooms in years because I only use them once every three or four years (seriously, I can't remember the last time I a zoom for a non sports event) and I can't see the economic sense in updating them. I made the decision to bring zooms to this event because I knew I was going to be locked down in one place the whole time, so moving around and composing with my primes would not be an option.

I brought a 300mm lens and a 2X teleconverter to Thailand with me, but I don't usually carry it because it's too heavy to tote around and I just don't use it that often.

I brought the 300mm lens and a 2X teleconverter this time. Normally, I'm not big on 2X teleconverters. While they multiply the lens' focal length by 2 (the 300 becomes a 600), they also cost two f stops of lens speed (the f4 becomes f8) and they cut sharpness and contrast. My camera bodies don't autofocus at f8, so I have to do the manual focus thing.  Figure you're photographing something a ways away (otherwise you wouldn't need a 600mm lens), haze is an issue and suddenly the loss of contrast becomes a huge deal. But if you need a 600, you NEED a 600. So I brought the 2X with me.

For the dress rehearsal I used my 300 with the 2X on one body and a 70-200 zoom with a 1.4X teleconverter on the second body. This was a long lens event if ever there was one. I photographed the barges coming down the river with the 600 combo and the barges as they passed me with the "shorter" combo. Things worked out pretty much as I expected.

Being on the west side of the river was crucial. The procession starts at 3PM and they passed the grandstand at about 3:30 - 3:45 so the afternoon light was perfect. The barges would have been badly backlit from the east side of the river.

After the procession ended, I ran (okay, waddled briskly, I had 25 pounds of camera gear around my waist in a ThinkTank batman utility belt) down to Wat Arun, about three blocks away, to photograph the rowers relaxing in the barges. That's where I used the 16-35 and 28-70 lenses the most.

There are more photos of the procession rehearsals in my archive.

Finally, most of the photos in my archive are available for editorial licensing or self fulfillment for prints. If you see something you like, click on the "Add to Cart" button and follow the on screen prompts.
Posted by Jack at 11:30