POTUS at the Podium 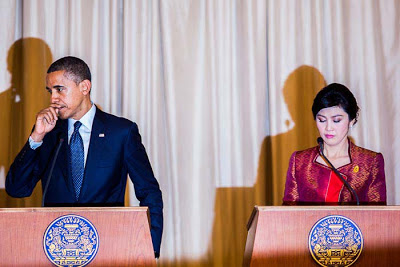 President of the United States (POTUS) Barack Obama and Thai Prime Minister (PM) Yingluck Shinawatra at their joint press conference at Government House in Bangkok Sunday night. The lighting is caused by another photographer's flash going off at the same time I made my photo. This is one of my favorite photos from the night. Photo by Jack Kurtz / Getty Images

President Obama visited Thailand yesterday. He landed in Bangkok Sunday afternoon, toured Wat Pho, met with Bhumibol Adulyadej, the King of Thailand, and then came to Government House for a meeting with Yingluck Shinawatra, the Thai Prime Minister and attend a State Dinner. He ended the night at a meeting with US Embassy employees in central Bangkok and flew on to Yangon, Myanmar this morning.

Photographing a Presidential visit is both interesting and tremendously, unbelievably, excruciatingly boring.

It's interesting because he is after all the President. There is always the chance that news will be made or he might slip either figuratively or literally giving you a better picture than you would expect to get.

It's tremendously, unbelievably, excruciatingly boring because Presidential visits now are so tightly scripted there almost no chance of news being made and you have to be there hours in advance for security sweeps and you're kept hundreds of feet away from the President. President Obama is very disciplined and not given to off the cuff displays. (President Bush on the other hand was a relative wild man. I once photographed him drawing a power tool from a tool belt, pretending it was a "six shooter" and shooting reporters.) 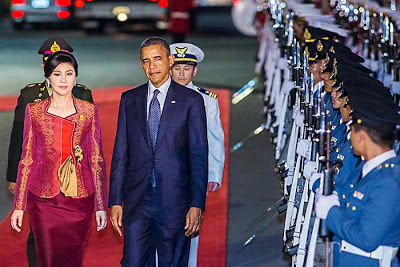 
But it was my first rodeo in Thailand.

The first thing I did after I was contacted by Getty was to register for the visit with both the US Embassy and the Thai foreign ministry since both organizations were involved in credentialing the media.

This would be my first time at Government House, the venue for the event. When I started planning my coverage, I made a reconnaissance trip to Government House to see what's what and get an idea for what the venue was like.

I made that trip on Friday morning. Conveniently, Government House was set up for a visit by the Ugandan President, Yoweri Museveni, so I studied the layout and eyeballed where the reviewing stand was, the photo risers, the red carpets etc. I had no idea if the layout would be similar for POTUS, (it turned out to be essentially the same, although there was a bigger press riser for POTUS) but I felt it was important to get an idea of what awaited me.

One thing I noticed is that Government House is in a sort of secluded section of Bangkok. Since I didn't expect to be finished with the event until close to 10PM (I knew I would have to transmit at the venue to meet the wire's tight deadlines), I decided I would hire a car and driver to wait for me because I wasn't sure of the taxi situation in a secluded part of town at 10PM on a Sunday.

While I was there I checked on the availability of wifi for transmitting. There was no public wifi, so when I left Government House I stopped at my cell provider's office to get extra internet capacity on my account and make sure I could tether my iPhone to my MacBook Pro and transmit that way.

Then I went back to my apartment and actually tried tethering my iPhone to my MacBook Pro (I did this all the time in the US, but I wanted to make sure it worked in Thailand) and it worked as advertised.

On Saturday I charged all my camera batteries and setup my "Batman utility belt." Normally when I work, I carry my gear in a shoulder bag (I'm old school) but for something like a POTUS visit, when you're on your feet and on the move the whole time, a shoulder bag can be an encumbrance so I use a ThinkTank skin series belt system to carry my gear.

I also pre wrote captions Saturday. I set up templates for captions in Adobe Photoshop Bridge and Lightroom, and wrote situation specific captions which I stored in Notes, an app that's included in Mac OS X Mountain Lion. I would copy and paste the situation specific captions into the tops of the boilerplate captions. Caption writing is incredibly important for photojournalists but it's also a gigantic time suck. By prewriting captions I was able to save a huge amount of time later when I was on deadline.

I was taking two camera bodies; a 5D Mark III and a 5D Mark II, five lenses; 24mm f1.4 L, 50mm f1.2L, 100mm f2, 200mm f2.8L and a 300mm f4L. I also packed my 1.4X teleconverter, which I ended up not using. I took two flashes (the Canon 430EX II), six 16 gigabyte Compact Flash cards and three 16 gigabyte Secure Digital cards. I was planning to shoot RAW+JPEG, edit the JPEGs at the venue for deadline and archive the RAW files. The 5D Mark III has two card slots (1 CF and 1 SD) allows you to shoot RAW files to one card and JPEGs to the other. The Mark II has just one CF slot and shoots RAW+JPEG to the same card. I set up the Mark III to shoot RAW files to the Compact Flash card and JPEGs to the Secure Digital card (because my MBP has a built in SD reader, I could download the files from the Mark II CF card using a Compact Flash card reader at the same time I was downloading the Mark III files off the SD card).

I passed through the first ring of security and went to the press working area and waited. And waited some more. While I was waiting I made a picture of groundskeepers working around the reviewing stand and sent it to Getty to make sure everything was working. (Photo 1 in the slide show). Then I waited some more.

At 2PM, the Thais opened the credentialing process and I picked up my credentials and went through a second security screening. And then we (by now there was a crowd of media at the venue) waited some more.

Thai officials had been very friendly and polite the whole time.

The US Secret Service was not. They were officious and rude and typically American. They barked orders to the Thai reporters in English and if the reporters didn't understand they barked them louder, which oddly enough didn't work. I was surprised they didn't have Thai liaisons with them to work with the Thai reporters.

Finally at about 4:45 we were let back into the venue and to the riser. And then we waited until 6 for the President and Prime Minister to arrive. If you've spent any time at all in Bangkok, you know that standing around outside from 1PM to 6PM can be miserable. It's the hottest part of the day in a very hot part of the world. But we lucked out Sunday because it was sort of cloudy, which made the day bearable.

POTUS and the PM walked in together at 6 on the dot (I love it when politicians are punctual - many aren't). The sun sets quickly in the tropics and by 6 it was quite dark out. Fortunately, the 5D Mark III is an excellent high ISO camera so I was able to shoot at ISO3200, 6400 and even 12,800 and still have usable images. That would have been unheard of even four years ago.

POTUS and the PM presided over a 15 minute welcoming ceremony. The Thai Army Band performed the National Anthems of both countries, POTUS and the PM reviewed the Thai Honor Guard and then they went back into Government House. I made pictures, mostly with the 200 but also with the 300 and a couple of overalls with the 50, the whole time. In 15 minutes I ended making about 220 exposures. I was motoring through them as quickly as the camera buffers would clear.

As soon as they left the area, the media scrambled to get to their joint press conference, which was on the opposite end of the Government House complex.

The press conference was scheduled to start at 7:15, so we had plenty of time, but the photographers working for wire services (Getty, AP, Reuters and AFP) were expected to file as soon as possible.

As soon as I got into position at the press conference venue I broke out my MacBook Pro and started editing the JPEGs. I reviewed the photos very quickly, selected 16 or 17 photos, applied the boilerplate captions and copied in the situation specific information, made very minor tweaks for exposure in Camera Raw and then saved the files as JPEGs and transmitted via my tethered iPhone. I finished at 7:05, just before POTUS and the PM came out for the press conference. I did all of this in Bridge and Photoshop rather than Lightroom (which is what I usually work in because in my experience this workflow is better with JPEGs, while LR is better with RAW files).

I was ready when the principals walked out for the presser. I photographed them tight and loose, vertically and horizontally, basically every combination of them I could. The room was lit for TV, so I didn't use flash, but some of the amateurs who had somehow scored credentials were using their flashes and a number of my exposures picked up their flashes. Those were some of the pictures I liked the best and is how I made the picture at the beginning of this blog post.

They took four questions - two from Thai media and two from US media. The very first question was the best, from a Thai reporter about human rights in Thailand and the aftermath of the 2010 army crackdown against Thai democracy protesters (more than 90 died during the protests). The questions from the US reporters were, not surprisingly, not very applicable to the situation. They were about the "fiscal cliff" and Arab Spring and, I thought, meant to elicit a sound bite rather than a real response pertinent to US-Thai relations.

Then it was over, POTUS and the PM left the stage and walked to the State Dinner. I ran back to the press working area (which was over where we had started at the reviewing stand), by 8:10 I was set up at my MBP and editing my take from the press conference.

I am never very good at keeping track of how much I shoot, but I shot a lot - well over 800 frames. I was able to motor through them in Bridge in short order. I had to switch Compact Flash cards in the Mark III towards the end of the press conference because I filled the first one. Each CF card holds about 530 photos at the size I shoot at. By 9:15 I had captioned, cropped and edited 30+ photos and sent them to Getty. I called my driver and by 9:30 I was back in the cab and headed home.

I was home by 10. That's when I realized how much I shot. About 1020 individual exposures. Back in the film days that would have been about 28 rolls of film. Yikes. When I got home I started working on the RAW files.

My pictures people saw on the wire were from the JPEGs, the pictures in my PhotoShelter archive and this slideshow are from the RAW files.

NOTE: These photos are not for sale or reuse. They are © Getty Images and used courtesy of Getty Images.
Posted by Jack at 06:24