Party Cloudy With a Chance of Tear Gas 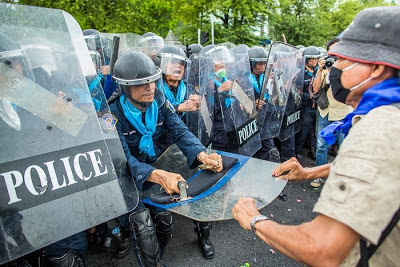 Thai riot police and anti-government protesters scuffle near Government House Saturday afternoon. I was put on assignment by Getty Images to cover the protest. These photos are not available for use and are used courtesy of © Getty Images.

Saturday's protest started peacefully enough with both Buddhist and Brahmin blessings. At the main stage, on the north end of the protest site, there was a festive, almost street party atmosphere (which is normal in Thailand). Street vendors were doing a brisk business with barbecued meats, soft drinks, sweets and other snacks. There were also lots of Thai flags and the yellow banners of the monarchy for sale. Thai musicians put on concerts and every once in a while the crowd would break out chants of "Yingluck, Get Out!" I don't speak Thai but the phrase for "Get Out" is one I understand and in Thai it's rather poetic (I learned it in 2010 when the crowds chanted "Abhisit, Get Out!")

It was a different story at the south end of the protest site, about 1 kilometer away. There protesters were confronting riot police, and had set up a second stage with more strident speakers. Very early on police fired a volley of tear gas to break up a group of protesters but for most of the morning it was a tense peace. Anti-government protesters retreat near Government House Saturday afternoon. These photos are not available for use and are used courtesy of © Getty Images.


About 1.30PM, tensions ramped up on both sides. Police became more assertive, occasionally bringing up their batons and pounding on their shields (it makes a very loud, intimidating noise) and protesters staged a sit in right in front of police.

Police issued a final order for protesters to disperse. Most stood their ground, but a few charged police positions and started wrestling with the police. At that point it was game on.

Police didn't issue any more warnings. The next sound was the pop of a gas grenade detonating followed by the whoosh of a cloud CS enveloping the crowd.

Shortly after that, police started setting off disorienting stun grenades. Most in the crowd fell back towards the main stage. I walked back with the crowd, using a 3M breathing filter someone in the crowd had given me, to help me breathe in the thick cloud of tear gas (it helped a little - I wasn't completely overcome like some were). I tried to photograph the crowd as they retreated in the face of the police actions, but it was hard to see through the camera's viewfinder with the gas in my eyes and in the air.

Eventually the gas cloud thinned out and people stopped to rinse out their eyes and recover. I made some more photos of people recovering from the gas and headed back to my apartment to transmit.

Tech Note for Photo Geeks: When you cover something like this for a wire service, you need to be able to transmit immediately.

I would photograph on my Lumix GX1, recording the photos to an 8 gig Eye-Fi SD card  (I was shooting RAW+JPEG) which sent the JPEGs directly to the phone as I worked. I then processed the photos on the phone using Photogene2 ($.99 in the iTunes app store).

Photogene2 has powerful image editing tools, a built in IPTC editor for captions and a built in ftp client. It worked very well. I used to use Filterstorm for this kind of work, and still have it on my iPhone, but I've had problems with unexpected quits with Filterstorm, so I decided to try Photogene2. I like it. I don't normally advise using new software in the field on a live assignment, but Photogene2 is easy enough to use that I was able to use it live on the first try. I give Photogene2 5 stars.

The only drawback is that the Eye-Fi card uses a lot of power in the camera and using the iPhone this way drains the battery very quickly. By the end of the day, both my iPhone and GX1 were dead. (The pictures that fill the frame in the slideshow were made with Canon bodies, the ones that are more square, and have space on the left and right, were made with the GX1.) The iPhone went through both its built in battery and the Mophie Juice Pack Plus I have.

I went back to my apartment to transmit because I photographed most of the intense action on my Canon 5D Mark III and Mark II bodies. I don't use the Eye-Fi cards in those bodies because they cause lockups on the Mark III and the Mark II is compact flash only. I had to get back to a real computer to edit and transmit. Plus, my GX1 was very nearly dead and my iPhone was down to emergency status. When I am on the street in a situation like this I am very mindful of how much juice I have left on the phone so I can use it to make emergency calls if I have to.

Finally, these photos are NOT available for reuse or resale. They are © Getty Images and used courtesy of Getty Images.
Posted by Jack at 20:49