Living Under the Gun 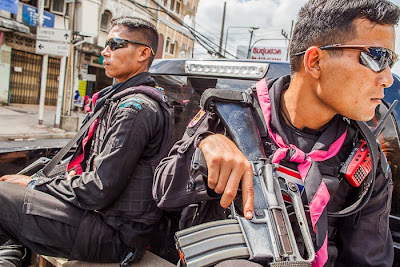 Thai Rangers patrol in Yala from the back of an open pickup truck.

The situation in south Thailand is complicated. Just ask almost anyone who lives there. In Pattani, Narathiwat and Yala provinces there is a low intensity war being fought between Muslim separatists and Thai authorities.

Centuries ago, Pattani was an independent Muslim sultanate and one of the leading trade ports in Southeast Asia. It was a part of the Britain's Malaya colony in the late 1800's and ceded to Thailand in the first few years of the 1900's. The people of Pattani remember the sultanate like it was yesterday and chafe at Thai rule when their ties are much closer to Malaysia than they are Thailand. (Most Thais in the south speak a local dialect of Malay and are Muslims, like most Malays.) 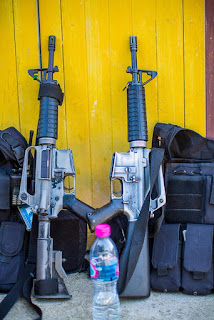 Soldiers' M16s in a temple in Yarang.

There are daily terrorist attacks against civilian targets. Authorities blame Muslim separatists for most of the violence but there's enough blame to go around and the situation is spiraling into a tit for tat exchange of violence. Muslims blame the government and Buddhist militias.

In September, a massive car bomb went off in front of a Buddhist owned gold shop in Sai Buri. Six were killed, dozens injured. It barely made a blip in the media outside of Thailand. Even in Bangkok, a car bomb that destroyed a city block (admittedly Sai Buri is a small city) and killed six barely registered.

In October, while I was in Narathiwat about 40 miles away, in an apparent revenge attack for the car bomb, someone rolled a grenade into a crowd of Muslim diners in Sai Buri. People saw the grenade coming and scattered. No one was killed but several were injured. A few days later, in another apparent revenge attack, someone sprayed an amusement park on the beach with automatic weapons fire before detonating a bomb. It was Buddhist night at the park and one was killed. (Yes, the park and beach have unofficial Buddhist and Muslim nights.)

On my last full day in Pattani, a day I spent photographing Ok Phansa in Yala, someone launched a grenade from a M79 grenade launcher into an orphanage near Yala. Think about that. A grenade was fired into an orphanage. Authorities speculate that it was a mistake, a miss aimed shot and that the intended target was a police post down the road. Still, it takes a special kind of sociopath to fire a grenade into an orphanage. Thankfully, the grenade was a dud and didn't explode.

Buddhist monks go out with military escorts and body guards. Children go to school under military escort. The Thai government has created paramilitary militias to protect villages and issued guns to teachers. There are checkpoints everywhere in the three southern provinces. Muslim civilians complain about police intimidation and human rights violations (well documented by Amnesty International).

Unless you're near an attack or covering the violence though you may not even realize there's a war being fought in the shadows.

The night market in Pattani goes until midnight. People are out shopping and eating and the security presence is not oppressive. There are new apartment buildings going up in Pattani and a new shopping mall is being built across the street from the night market. This is not the kind of development you see in a war zone. The fishing port is one of the busiest in Thailand.

Driving through the countryside it's easy to be seduced by the beaches and palm trees. It's paradise. The beaches are deserted (a rarity in tourist obsessed Thailand). Then you hear about Sai Buri and know why the beaches are empty. What tourists want to tan on a beach when bombs could go off at anytime?

The bars in Sungai Kolok, on the Malaysian border, go all night. Men from Malaysia are their main customers. They come to Muslim Thailand to engage in behavior that is not condoned 100 meters away in Muslim Malaysia.

This is not my first visit to Pattani and the south. I love it down here. People are decent and hardworking. What's happening here is heart breaking. I don't know what the solution is. It's been going on, in one form or another, for centuries. (People in Pattani talk about the Siamese from Ayutthaya sacking and burning the Pattani palace in the 1700's like it was yesterday.)

But the situation can not continue. Thai authorities can't "win" the way this is going. The separatists have no chance of victory. They have very limited resources and little international support. I'm afraid both sides will reach a tipping point when this sort of war, not really a peace, will become an all out war.

There are more photos of the southern situation in my archive.