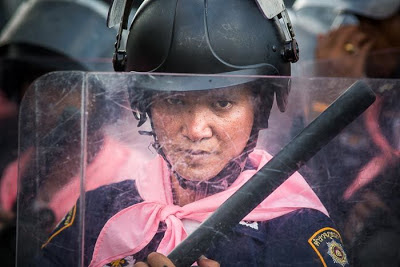 A Thai riot policeman drills with his comrades near Government House in Bangkok Friday. The scarf is not a fashion accessory. It identifies the officer's unit. Others wear green, blue, red etc.

Authorities around Government House spent Friday preparing for what they expect to be a large anti-government protest. The protest was called by the Pitak Siam group which hopes to provoke enough confusion that the Army will step in and force out the government of Prime Minister Yingluck Shinawatra.

Pitak Siam claims the current government is corrupt. Corruption is a huge issue in Thailand. There is an entire government department dedicated to rooting it out and daily headlines about corruption inside and outside government.

This will Pitak Siam's second rally. Their first one, in October while I was in the South, drew many more people than expected. This time they claim they will have 500,000 to 1,500,000 people filling the streets around Government House in Bangkok.

The government is taking that claim seriously. They are putting well over 10,000 riot police on the street, imposing the Internal Security Act and putting several army units on alert to back up the police.

In many ways, this is a movie we've all seen before and it seldom ends well.

Yellow Shirt anti-government protests like this in 2008 eventually led to the occupation and closure of Bangkok's airports (a move most now acknowledge was a huge mistake and cost Thailand and other South East Asian countries that rely on Bangkok's airport as a gateway tens of millions of dollars and disrupted global travel for weeks). Red Shirt protests in 2010 (who support the current government but opposed the government at the time) left over 90 dead when the army attacked protesters.

If you think it's confusing you're right. It would be easy to make fun of the whole colored shirts thing, but it would be a mistake to do so. The Thais take this very seriously. I am mindful of what I wear when I go out on the street. I don't wear either red or yellow because I don't want to be associated with either side.

One of the things I enjoy about working in Thailand is the relative freedom reporters on the street are given to work.

My taxi couldn't go past a police checkpoint near Government House Saturday. I got out, waved to the police and walked through their lines. Inside the perimeter I was free to photograph and talk to whomever I wanted to (the language barrier prevented any long discussions but I did have friendly chats with a couple of English speaking officers).

When it started to rain, I took shelter in a tent on a median. When I got into the tent, I realized it was a command post and there were a number of high ranking police officers gathered around a table covered with maps and charts. They didn't shoo me out - they let me hang until the rain stopped.

Thai media inside the perimeter got the same treatment. At one point an ice cream vendor stopped by the police lines and a cop bought me an ice cream sunday. That doesn't happen in the US.

There are more photos of the police and protesters alike preparing for the protests in my archive.

These photos, and many others in my archive, are available for editorial use or self fulfillment as prints. If you see something you like, click on the "Add to Cart" button and follow the on-screen prompts.
Posted by Jack at 10:00