The Long and Short Of It 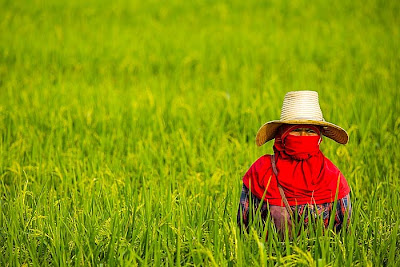 I went to Nakhon Pathom, about 40 miles (and two hours) from Bangkok yesterday. On the drive out I saw some workers in a rice field so I stopped to photograph them for a few minutes.

Workers in rice fields are a dime a dozen in Thailand.

I stopped for a couple of reasons; I really liked the quality of light. It was fairly early in the day and a little cloudy, so the light was diffuse and directional at the same time. Kind of a nice giant soft box feel to it.

Also, rice in Thailand is in the news a lot lately because of the government plans to pay a higher price to farmers and then store the rice until prices go up in what they're calling a rice pledging "scheme." Economists, legal experts and academicians are debating the merits of the so called "scheme" but it makes photos of people in rice fields particularly newsworthy right now.

I photographed the workers with long and short lenses. I didn't need the telephoto because I couldn't get closer, access wasn't a problem. I used the telephoto to compress the perspective and accent the colors. I really liked the way the woman's red scarf played against the green of the rice field.

Here's the same scene photographed with a 50mm lens. 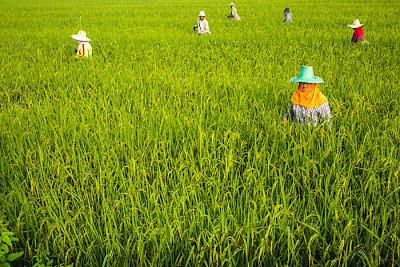 There are more photos of the rice workers, photographed with long and short lenses, in my archive.