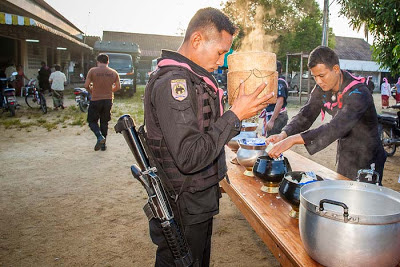 A Thai Army Ranger prays before making merit during the Tak Bat for Ok Phansa at Wat Kohwai in Yarang with a bowl of steaming rice.

Ok Phansa is a Buddhist holiday that marks the end of Buddhist "Lent" or the three months rains retreat. People make lavish gifts to their temple and special processions with monks or statues of the Buddha riding in lavishly decorated carts and floats. The processions symbolize the Lord Buddha's return to earth after his three month retreat to heaven. It's a very happy holiday.

For the people of Wat Kohwai, this year's Ok Phansa was particularly happy. The Buddhist village is an island in a sea of Muslim villages. For the last eight years, it's been to dangerous for the villagers to hold the processions or celebrations.

This year the Thai army dispatched a unit of Rangers to the village. Their mission was to protect the village. But in the Thai way, they also participated in the holiday, livening up an already lively event. Soldiers danced and sang and wore silly hats while protecting villagers and carrying M16s.

Sanuk is a Thai word I like. It means fun, but more than the word fun, it really means the concept fun. That you should have fun and enjoy what you're doing, whether it's sitting in traffic, going to a movie or a soldier on a potentially dangerous mission. The soldiers dancing during Ok Phansa was Sanuk in action.

I couldn't help but think I wouldn't have seen American soldiers in silly hats and dancing with each other while they were on a mission. I'm not saying the Thai way is better. But it is certainly different.

There are more photos of Ok Phansa in my archive.


Finally, always remember and never forget that most of the photos in my archive are available for licensing for editorial use or self fulfillment for prints if you'd like to hang one on the wall, just click on the "Add to Cart" button and follow the on screen prompts.
Posted by Jack at 10:30