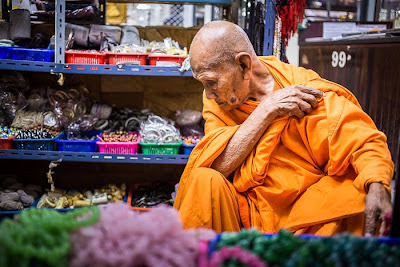 A monk shops for Buddhist paraphernalia in the amulet market in Bangkok.

Bangkok is like an onion. A loud, congested onion.

You think you've seen it all then you turn a corner and you're in another world. The amulet market north of the Grand Palace around Wat Maharat is an example of that. Vendors line the streets around the Wat (Thai for temple) selling amulets and Buddhist paraphernalia.

You can find an amulet for almost any need. Soldiers and policeman (and maybe those on the other side of the law) shop for amulets to protect them from bullets and the forces of evil. (I was here in 2010, when the Thai army was shooting protesters and people on the street offered me amulets to protect me from the Army's bullets.)

The lovelorn look for an amulet to help mend their broken hearts, those struggling in business shop for one to ensure their financial well being.

It's said that you can't buy an amulet's success, you merely rent it.

Package tourists usually don't get a chance to see the market. Their chartered bus drops them in front of the palace. They see the palace, run into Au Bon Pain (yes, that Au  Bon Pain) for a smoothie or other cold drink, then it's back on the bus and onto the next stop on the tourists' trail.


If western tourists visit the amulet market at all, it's usually just to walk up and down the main streets that surround Wat Maharat.

But there's a whole new world that awaits folks who venture off the main street and into the alleys between Th Mahathat (Th is the abbreviation for Thanon, the Thai word for street) and the Chao Phraya River. Small stores and workshops sell Buddhist religious materials of all sorts from amulets to texts to statues and iconography.

It's a dark, congested space but it's one of the most interesting places I've found in a very interesting city. If you're coming to Bangkok, you owe it to yourself to visit the amulet market.

There are more photos of the amulet market in my archive.
Posted by Jack at 11:30