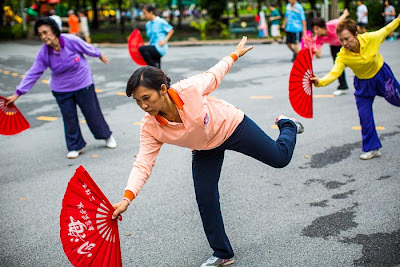 Lumphini Park is a tree filled, shady oasis in the midst of Bangkok's concrete jungle. The park was built in the 1920's, when Thailand was Siam. Then Bangkok basically stopped at Hua Lamphong train station, the beautiful art deco main train station on the edge of Chinatown. Now Bangkok extends almost all of the way to Pattaya to the east and for miles north and west. The city has grown up around Lumphini. The 142 acre park is named after Lumbini, the Buddha's birthplace in what is now Nepal.

In the morning thousands of people flock to the park for their morning fitness rituals. There are energetic jazzercisers near the main gate (with workouts repeated in the evening), joggers on the trails, Tai Chi practitioners in the center of the park and yoga enthusiasts on the lake shore. In the afternoons families rent paddle boats on the man made lake in the center of the park and young lovebirds flock here for privacy in the evenings.

Bangkok's first public library is in Lumphini Park, there's an outdoor bandstand with concerts (winter only) and street food stalls line the edges of the park. No matter what time of day it is, the park is an escape from the tumult of the city. As befitting an oasis, it's easy to get to Lumphini Park. Both the MRT (subway) and BTS (Skytrain) have stations next to the park.

There are more photos of Lumphini Park in my archive.