End of the Vegetarian Festival 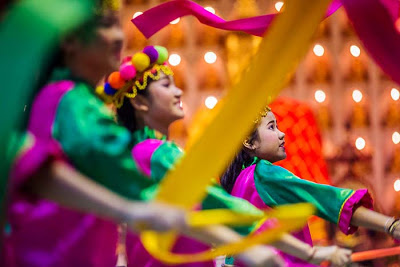 Girls perform a traditional dance for the last day of the Vegetarian Festival at Wat Ta Won Vararum in Hat Yai. Made with a Canon 5D Mark III, 200mm f2.8 L lens, at ISO3200.

I came to southern Thailand to work on stories in the "restive" deep south and see Hat Yai, a town I've read about but never visited. It's an interesting town, settled by Chinese traders centuries ago. Even today, the Chinese influence is unmistakable. Signs are in Chinese and Thai and the temples are heavily influenced by Chinese style rather than Thai. It should be no surprise that the Vegetarian Festival is an important event here.

I got to town on the last day of the Festival. My routine in a new town is to walk out of the hotel, pick a direction and walk. I usually bring a map, and I occasionally consult it, but normally I just wander and trust my fate to whatever will be. Which is exactly what I did tonight. I left the hotel looking for something to do.

I saw the temple's roof line from the road and wandered down to it to see what's what, hoping to see ceremonies marking the end of the Vegetarian Festival but not really expecting to.

I lucked out. Not only were they getting ready for the service for the end of the Festival, one of the people in the temple went to high school and college in California and had lived in Fairfax, VA., and spoke idiomatic English. She invited me to photograph the service and cleared it with the abbot.

I had asked to photograph Vegetarian Festival services in Bangkok but was turned down because it would disrupt the nature of the service.

That's understandable. There are so many foreigners in Bangkok with cameras that if the abbot had let one (me) in, he would have ended up with a whole pack of photographers disrupting the service.

But in Hat Yai, which is a little off the normal European/American tourist track, I was a novelty and they were honored to have me there. I was given a very hospitable welcome to photograph whatever I wanted to. The service itself was beautiful and ended with a spectacular candle light procession around the temple.

The monks led the procession and temple goers, dressed in white, followed silently holding candles aloft. It was magical. The serendipitous nature of life in Thailand is one of the things that attracts me to life here. Why did I choose to leave my hotel and walk in that direction instead of another? Why then and not an hour earlier? Of all the temples in Hat Yai, how is it that I met a woman who went to high school and college in the US and spoke flawless English and invite me to photograph in the temple? I don't know the answers to any of those questions. But I'm not going to question good luck when it's thrust at me.

There are more photos of the Vegetarian Festival in Hat Yai in my archive.

Finally, always remember and never forget that most of the photos in my archive are available for licensing for editorial use or self fulfillment for prints if you'd like to hang one on the wall, just click on the "Add to Cart" button and follow the on screen prompts.
Posted by Jack at 11:00