Alms Ceremony for the South 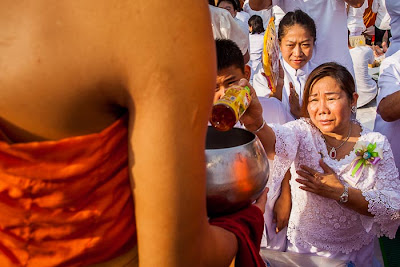 A woman gives a bottle of juice to a monk during a mass alms giving ceremony in Banjasiri Park Saturday.

There was a mass alms giving in the park near my apartment Saturday morning. More than 2,600 Buddhist monks were in the park to receive alms from Thai Buddhists. The purpose was to support Buddhist Wats (temples) in Thailand's three southern Muslim majority provinces.

In Buddhist tradition, monks go out every morning and solicit alms from the community. Usually it's food, but alms can include money and drinks (fruit juice only). The sight of monks, in their bright orange robes, silently walking through the southeast Asian countryside or city streets is a common one.

Thailand's three southernmost provinces: Pattani, Narathiwat and Yala are on the dividing line between Muslim Asia and Buddhist Asia. To the south; Malaysia and Indonesia are overwhelmingly Muslim. Thailand, to the north, is overwhelmingly Buddhist. And Thailand's southern provinces are caught in two worlds.

The provinces have a long history of independence - Pattani was once the center of a Muslim sultanate - and up through the colonial period identified more closely with Malaya than Thailand, the people in the south speak Yawi, a dialect of Bahasa (spoken in Malaysia and Indonesia), rather than Thai and use an Arabic script rather than Thai script. The British signed away the provinces - ceded them to Siam, now Thailand, in the very early 20th century.

Thailand has governed the provinces since. A number of Thais have moved to the provinces, Buddhist monks and temples followed. There have been tensions in the provinces for decades. In the early 2000's, violence flared again. Muslim extremists have targeted Monks, teachers and schools as representatives of the Thai state. Thai security services have shown excessive zeal and committed human rights abuses in pursuing guerillas. (In one infamous incident, Thai forces arrested hundreds at a political demonstration, bound them and threw them into semi tractor trailers to haul them away to a jail. More than 80 died of suffocation during their hours long journey in tropical heat.)

As a result, it's dangerous for the monks to go out on their morning rounds. The ones who do go out do so under armed guard. School children go to school under armed guard. Today's alms giving was to support temples in the south.

There are more photos of the mass alms ceremony in my archive.

Finally, always remember and never forget that most of the photos in my archive are available for licensing for editorial use or self fulfillment for prints if you'd like to hang one on the wall, just click on the "Add to Cart" button and follow the on screen prompts.