A Home for the Unwanted 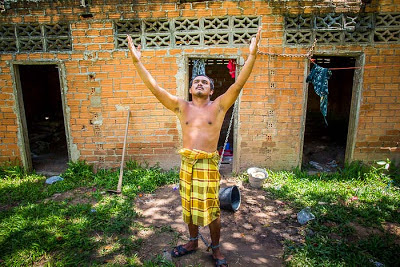 A man chained to a wall greets the day with a prayer in a home for the mentally ill in rural Pattani province.

One of the stories I went to Pattani to work on was about a home for the mentally ill I had heard about in the Mayo district in rural Pattani province. I wasn't sure what I was going to find - if I found it at all - the only thing I had to go on was the name of the district (township) the home is in. No address or street. I didn't even have the name of the home.

I work with a local journalist when I go to Pattani, I told him what I was looking for and we set off driving up down the back roads of the province - asking strangers if they knew about the place and surely but slowly we zeroed in on the home.

My first thought when we pulled up was that the place looked nice. A large sloping yard led up to the main house. Rows of brick huts lined both sides of the yard. It looked vaguely like a rustic resort. One that had fallen on hard times to be sure but a resort none the less.

Then I noticed the chains on the wall. And the people shackled to the chains. I realized this was unlike any health care facility I've ever been to.

We introduced ourselves to Nuriah Jeteh, the woman who operates the home. She told us how her late husband opened a traditional Islamic school here some 27 years ago. People in the community asked him to look after their mentally ill family members. He said yes and soon the school was a home for the mentally ill. People no one else wanted. And people who couldn't get help, any help of any kind, anywhere else.

Jeteh's husband died unexpectedly in 2006 and she was left caring for the people and her husband's legacy. She said every month is a struggle; a struggle to find the money to buy food, a struggle to keep up the buildings and the property, a struggle to protect her residents from the vagaries of the outside world. She said she did most of the work by herself. She had someone helping part time with the cooking, and one of the residents - a patient in recovery - helped around the property. But she said she got no government support. In fact, she said, half of her six residents were dropped off by Thai security services, the police or military. Then she excused herself to make lunch for the six residents she still has on the property.

We walked down to the housing units and watched some of the neighborhood boys roll in bikes. One of them had a handful of longkong fruit with him, a local delicacy. He walked towards one of the rooms and tentatively tossed some of the fruit into it. A hand reached out and grabbed the fruit, inside a man, his leg chained to the wall, hungrily peeled and ate the longkongs. Another man, also chained to his wall, called out for food. "Mother, I'm hungry." He called over and over again. The residents of the home call Jeteh "mother."

I talked to the boys on their bikes. They said they come by nearly every day to bring fruit and snacks to the men. They were clearly afraid of them - they wouldn't approach the rooms. But they didn't throw the fruit like they were trying to taunt the men. They didn't throw the fruit at the men - they tossed it into the men's rooms. I sensed that it was really an act of kindness for them.

One of the boys said the men had nowhere else to go. He pointed to one man and said "he started a fire in his village. They brought him here and don't want him to go back. Where else can he go?"

Another boy said the army brings people to the home and just pushes them out of the truck. He said, "one time, they came and they had a jail on the back of their truck." I assume the boy was talking about a "paddy wagon" type vehicle.

These are men who have serious problems. Thailand has some drug rehab facilities, but the nearest one is in Songkhla, nearly 150 miles away and that is for drug rehab only. There are no psychiatric hospitals in the sense that we're used to.

Two of the six residents don't know who they are. One told me his name but then said he had so many names he couldn't really remember who he is. Another said he was arrested at a political protest, passed out in an army truck. Woke up at the army camp hours later. Passed out again and then woke up chained to the wall in the home. He's been chained to the wall for eight years. He said his family - if he has a family - never comes. He doesn't remember his name and doesn't remember how he got to the home. But he says he has nowhere else to go.

Nuriah Jeteh is doing the best she can under very difficult circumstances. She doesn't profit from the men. Far from it. Supporting the men who live on her property has consumed everything she has.

There are more photos from the home in my archive.