Viva Mexico! Waiting for the Show! 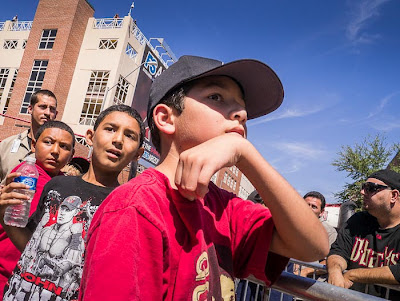 Lucha Libre fans wait for the wrestlers to show up at an exhibition match in front of Chase Field, home of the Arizona Diamondbacks. Lucha Libre is Mexican style wrestling that is becoming popular north of the border.

Today is September 16, just another day in September in the US, but it's "Independence Day" in Mexico. On Sept 16, 1810, Father Miguel Hidalgo, Mexico's revolutionary hero, issued the Grito de Dolores, Mexico's declaration of independence from Spain, in a small town in the state of Guanajuato.

In the US, we tend to celebrate Cinco de Mayo as Mexico's independence day, but that's wrong. Cinco de Mayo (May 5th) is a holiday in Mexico and celebrates the defeat of French forces (France invaded Mexico in the 1861). But Mexico's real Independence Day is September 16.

The Arizona Diamondbacks traditionally mark a home game in mid-September as Hispanic Heritage Day. September 15 - October 15 is Hispanic Heritage Month and Arizona has a large Hispanic population. It's good business to celebrate Hispanic culture. This year they lucked out with the day falling on Mexico's actual Independence Day.

They celebrated the day with a Lucha Libre show on the plaza in front of Chase Field before the Dbacks game against their arch rivals, the San Francisco Giants.

We had a good time watching some of the show. It's the last time for quite a while that I'll be able to do anything that comes close to Mexican culture because I leave for Thailand Tuesday morning. My cameras are packed, so I took my Panasonic GX1 and lenses and made a couple of photos. It was a fun way to spend my last real day in town. (Monday, my real last day, I have a bunch of errands to run.)

There are more photos of the Lucha show, and Lucha Libre wrestling, in my archive.