Up in the Sky! 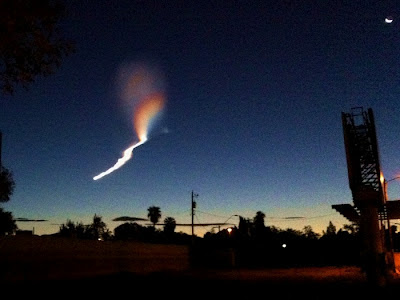 I caught the last few seconds of a show during my walk this morning. In a Star Wars test, a missile fired from Ft. Wingate, near Gallup, NM, was hit by a Patriot anti-missile missile fired from White Sands Missile Range, near Alamogordo, NM and apparently exploded.

I was walking up 16th Street just past Indian School Rd in Phoenix and saw the contrail. While I was reaching for my iPhone (for its always present camera) I saw a second missile come in and strike the first one. You can just barely see the end of the impact to the right below the rainbow, which I am guessing was the explosion from the impact. The crescent moon is visible in the upper right corner of the photo.

It was a weirdly beautiful sight. At the time I didn't know what it was. I posted a quick, straight of camera JPEG to my Facebook page and almost immediately was told via Facebook comments that Phoenix TV stations were reporting it as the missile test.

I've been walking through central Phoenix for a little over a year. I started out photographing things I saw on my walks, which were mostly related to recession that still grips the country. The morning walks are one of the things I'm going to miss in Thailand.

I've walked when the morning temperature was in the 30's and when it was in the 90's, in daylight, darkness, rain and shine.

I haven't made any friends per se. But I've seen the same people over and over again, to the point where we nod and exchange greetings.

There are lot of homeless people in central Phoenix, just west of our neighborhood. I see them sleeping on bus benches, taking shelter against abandoned buildings and camping under bushes.

A homeless woman stopped me on Christmas Day (I try to walk every day - including Thanksgiving and Christmas), she was drunk, and asked me how long she had been out and what day it was. I told her I didn't know how long she had been out, but that it was Sunday. She looked at me and repeated, "Sunday?" Yes, I told her Sunday. She asked "Christmas?" Yes, I told her Christmas. "Merry Christmas!" she blurted out before wobbling down the street.

Walking on New Year's Day, just after first light, probably 7AM, I watched a woman dressed in an evening gown walk down Indian School Road. She was carrying spikey high heels and weaving to and fro. She hailed passing cab and rode away. So much of it didn't make sense. I don't know where she came from - we were on a commercial strip of the road with no residences or hotels for quite a ways. Taxis don't cruise in Phoenix. There were no bars in the neighborhood. It was something I would expect to see in a Fellini film.

I stopped making pictures early this year when I wanted to improve my times. I was walking seven miles every morning but it was taking me 2 1/2 hours. I was leaving our house at 4:30AM in order to finish my walk and get to work for 8:30 assignments. Eventually I got the time down to two hours even. I still carry the iPhone with me though. I listen NPR (or BBC or music) and so I can call home if something happens. The photos I made of the missile test weres the first pictures I made on my walks in months.

Technical notes: shot with the iPhone 4 and processed using the app Pixelmator (available in the app store).
Posted by Jack at 22:01