Another in a continuing series of blog entries on Thailand and preparations for my move. 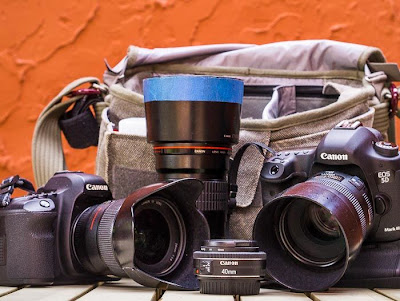 I leave for Bangkok in about two weeks and this seems like a good time for a rundown on the camera equipment I'm taking to Asia and why I'm taking what I'm taking.

I'm toting a lot more gear on this trip than I normally bring on a road trip. I'm going to be there for a year, maybe longer, and I'm basically bringing all my normal workday gear and backups, so if something happens I can keep going without having to find replacement gear.

My normal kit bag for working on the street is pretty basic (for a photojournalist). Two Canon bodies, five lenses (all Canon), two flashes and a remote trigger for the flashes.

The 5D Mark III is a terrific camera. At "normal" ISO's image quality is incrementally better than the 5D Mark II but at high ISO (3200 and up) this camera is a significant improvement. In every other way the Mark III is a huge improvement over the Mark II. Autofocus is lightning fast, 6 frames per second continuous shooting (vs 3.9 in the Mark II), better weather sealing and better video. All together a great package. I think the only downside is that at $3500 each they're a little overpriced.

2) Canon 5D Mark II (left). My main camera from 2008 until this year when the Mark III came out. This was/is an excellent camera. I was blown away by the high ISO quality when I got this camera - pictures made at ISO6400 looked like ISO1600 photos from other cameras. But that was then and this is now and camera sensor technology has come a long ways in three years.

One of the things I like about using the Mark III and Mark II as a team is that at low ISO image quality is so similar that it's easy to process photos through Lightroom at the same time. Autofocus isn't as fast and it's generally slower, but as a backup / second body the Mark II an excellent choice, plus the two use the same battery, which simplifies power needs. If you're looking to move into "full frame" digital photography, the 5D Mark II, at about $2,000, is a smokin' deal. The Mark II was my main body until I got the Mark III earlier this year.

Lenses are a personal choice.

I generally prefer fast prime lenses because of the control I have over depth of field and they instill some discipline. It's easy with a zoom to sit back and recompose a scene by zooming in and out, with a prime lens I explore the scene more, whether it's zooming with my feet or simply walking around. It's not always possible to "zoom with your feet" (like at a sports assignment or many breaking news events) but for street photography and about 90% of what I do, it's not a problem.

Canon's L series lenses are uniformly excellent. The 24mm f1.4 L is what I use when I'm covering a demonstration, a political event or need a wide angle. It's a little wide for general portrait use - it can distort your subject in unflattering ways if you're too close, so you have to watch that.

I got the 40 about two months ago and I'm using it a lot more than I thought I would. On a full frame body, it's a terrific walking around lens. It's very sharp, the autofocus is fast and, as you can see in the photo, it's impossibly small.

The 50mm f1.2 L is my general use walking around lens. I really like it. I love the look at f1.2, it's super sharp at f2 or smaller, it's got great color and contrast and well built. It's a little long for the way I work but overall it's a terrific hunk of glass.

The 100 f2 (not pictured) is not a L lens, but it's no slouch. It focuses fast, it's sharp and it's small. It's an excellent portrait lens and nice for use in markets and temples and the like. I don't use it as much as I used to but it's there when I need it.

The longest lens I carry is the 200mm f2.8 L (background). This has been my go-to telephoto for as long as I've been a working photographer. Back in the day, before autofocus, I used the FD version of this lens on my Canon F1 and A1 bodies. It's small, fast and super sharp. It's a more than worthy replacement for the big white zooms most photographers carry.

I don't use flash very often, but there are times when you just have to bust out some extra light. I carry a couple of Canon 430EX II flashes for those times. They're small and reliable and they work with Canon ST-E2 wireless transmitter so I can set up a quick and dirty multiple light setup.

That's what I carry when I'm out on the street. All of this stuff rides in a ThinkTank Retrospective 7 (pictured) or 5 bag. I usually use the 7, it's a little bigger and stuff doesn't get crammed into it quite as tightly but it takes up more space when I'm in a crowd. For those times I downsize to the Retrospective 5. In Bangkok, I will use the Retro 5 as my main bag.

That's a rundown of what I use on the street. Later this week, I'll write about the backup gear I'm taking.

My photos from earlier trips to Thailand are in my archive.
Posted by Jack at 12:40