That We Never Forget 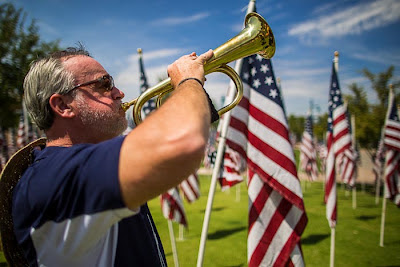 The President of the Tempe Exchange Club performs "Taps" at noon at the Healing Field in Tempe Beach Park.

For the last nine years, the Tempe Exchange Club and city of Tempe have been hosting the "Healing Field," a display of 3,000 American flags to honor the people killed in the terrorists attacks on Sept. 11, 2001. It's one of the best attended 9/11 memorial events in the Valley.

The event is free and takes up most of the space at Tempe Beach Park. People come and wander through the flags, read the names of the people killed that day. They remember friends and recall the horror of that day and the days that followed as smoke poured out of the hole at Ground Zero.

The attack was aimed at America, but it was really an attack on the world. There were victims from 90 countries. The UK suffered the second highest number of fatalities: more than 65 Britons died that day (more than the number of people killed in the London attacks on July 7, 2005), 47 people from the Dominican Republic died, 41 from India. Australians and Canadians were killed as were Jamaicans, Haitians and South Africans, Filipinos and Malaysians. American born citizens were killed, naturalized citizens, tourists, legal immigrants and undocumented immigrants were killed.

Watching the towers collapse on television, I knew our world was changing forever that morning.

There are more photos from the Healing Field (and from New York after the 9/11 attacks) in my archive.