Another in a continuing series of blog entries on Thailand and preparations for my move.

I wish all I needed on a long term road trip was two cameras, five lenses and a canvas bag. But it's not. Stuff breaks and a professional needs to plan for that. You get into situations where a 24mm lens isn't wide enough or a 200mm lens isn't long enough and you need to plan for that too. You always have to assume that something is going to go wrong. Plan for the worst and hope for the best. That's why I bring spares with me.

Here it is, one more camera, four more lenses and a flash.

My spare camera is a second 5D Mark II body. It was a terrific camera when it was new and it's still a very good one.

My extra lenses are both an extension of my regular line up and a back up to it. 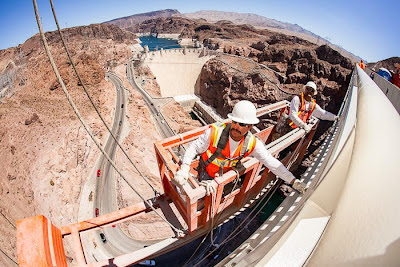 The 15mm Fisheye used to photograph construction on the Hoover Dam Bypass Bridge. The Fisheye nature of the lens is evident in the way the horizon is bowed. This photo would not have been as interesting if I had used my 24mm f1.4 L.

The widest lens I own, and by almost any measure it's a wide one, is Canon's 15mm f2.8 fisheye. You've seen photos from fisheye lenses - they're the ones with the wildly distorted horizons. Used properly, a fisheye can be a great tool and a lot of fun. Used improperly it's a cliche. I use it sparingly because it's way too easy to go wild with it.

The longest lens I own is a 20 year old 300mm f4. It's one of my original EOS lenses and it's a testimony to both Canon's quality and how little I use it that it still looks new and is tack sharp.

I've never owned a 300mm f2.8, the bread and butter of professional sports photographers. Too expensive, too big and too heavy. The 300 f4 is relatively small and lightweight (I say relatively because there's no such thing as a flyweight 300mm lens). When I have to photographically reach out and touch someone, this is the lens I go to. Coupled with a 1.4x teleconverter, I end up with a 420mm f5.6. Not great for indoor sports but for news or outdoor sports, like water buffalo racing, it's just what the photographer ordered. Because when you need a 300, you NEED a 300. 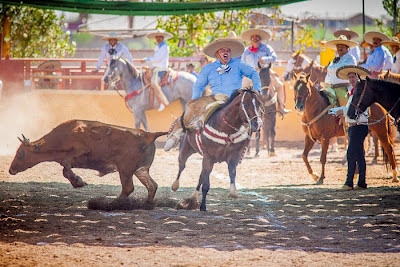 A photo from a Charreada (Mexican rodeo) made with my 300 f4 and a 1.4X teleconverter (roughly a 420mm lens). I shot this from the opposite end of the "Lienzo" (arena). I cropped it a little - just enough to straighten the horizon. It wouldn't have been nearly as strong if I had shot with anything less than the 300 and teleconverter because the main part of the image would be too small.

The 15 and 300 are not really spare lenses - they're a standard part of my toolkit that don't get used very often. I bring the 15 with me on almost every trip to Asia, even though I don't use it very often. I've only brought the 300 with me a couple of times, coincidently it's first trip out of the country was to Thailand in 1992.

On that trip I used it to photograph Thai King Bhumibol Adulyadej reviewing Thai troops at the celebration of the his birthday. The King is a revered figure in Thailand and the world's longest reigning Monarch. I haul the 300 around only when I think I'm going to need it. I suspect that at some point in a year's time, photographing everything from Thai politics, to Burmese refugees to construction, I'll need a 300. 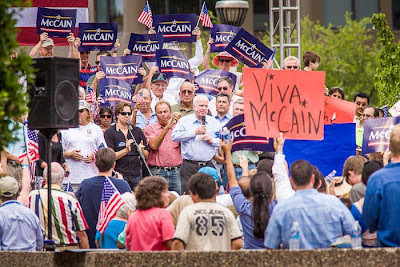 John McCain closes out his Presidential primary campaign in Arizona in 2007. I made the photo from outside the venue (the plaza at Tempe City Hall). I wasn't interested in a tight photo of McCain but a photo that showed the scene. 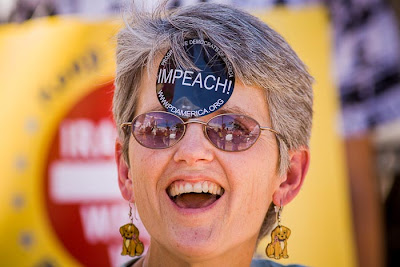 Another photo from the same event with just the 300. I could have walked up to the protester and used a wide angle, but I liked the way the 300 isolated her.

I haven't used them regularly since I went back to shooting with primes in 2005, when the original 5D came out. Through the years I thought about selling them but each time I came close to pulling the trigger, I decided to keep them, just in case I needed a backup.

I'm taking them with me to Bangkok both as spares and to use when I'm covering something that's better done with zooms - like political violence, sports and Songkran, Thailand's boisterous New Year's festival when people arm themselves with "super squirters," fire hoses and 55 gallon drums of water and douse everyone on every street with a pasty mixture of water and colored powders. Seen once it's a lot of fun. The fun wears off after about 20 minutes though. Songkran has killed more cameras in Thailand than theft, fire and disaster combined.

Finally, there's the light. I don't use flash very often and when I do I reach for my small Canon strobes. My backup flash is actually what most people use as their main flash - a Canon 580EX II. This is a nice flash. It's powerful and reliable and has lots of bells and whistles. There is only one reason it's not in my bag every day. It is huge. Size matters and smaller is better. I gladly sacrifice bells and whistles for size and so I carry the 430EX II as my main flash.
Posted by Jack at 11:20