On the Campaign Trail With a Little Camera 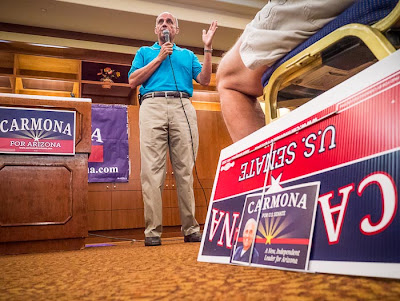 Dr. Richard Carmona talks to voters at a town hall meeting in Surprise this morning. This photo was made with a Panasonic GX1 and 20mm f1.7 lens.

As my departure for Bangkok approaches (eight days and counting), I am winding up my photography in the Valley of the Sun. I photographed what I suspect is my last campaign event this morning.

Dr. Richard Carmona, the Tucson Democrat, is facing Jeff Flake, the Mesa Republican, for the US Senate seat being vacated by Jon Kyl, a long serving Republican. Carmona, who has an amazing resumé (former US Surgeon General, decorated Green Beret wounded in Vietnam, college professor, cardiac surgeon, SWAT police officer) was in Surprise, where he hosted a town hall style meeting.

The room was packed to overflowing, which surprised me a little because that part of the Valley is generally Republican country. And the crowd was very enthusiastic about Carmona, which surprised me a lot. They gave him a standing ovation when he defended the Affordable Care Act (also called Obamacare and Romneycare). He said it wasn't a perfect health care reform bill, but that it addressed a number of serious problems we have in the US healthcare industry.

I enjoy covering the political process. It's a chance to see history in the making. I've spent a lot of time since my separation from the newspaper photographing politics and politicians, first the primary race and now the start of the general election campaigns.

I've been using my GX1 more and more for election photos.

It fits into my camera ecosystem in the same way my Contax G2 did back when photographers made photos with film. It's small, reasonably fast and has really nice image quality. It doesn't hold up as well at high ISO (above 800), so when I get into "available darkness" photography I usually default to my Canon dSLRs, which have much better high ISO image quality. But the little GX1 with its excellent 20mm f1.7 has its place.

The GX1 is a part of the Panasonic's Micro 4:3 lineup. It has a 16megapixel sensor (compared to the 5D Mark III and Mark II's approximately 22mp sensors). The M4:3 sensors are 1/2 the physical size of the full frame sensors in the 5D series (and competing Nikon) bodies.

I'm not sure I would have been able to make the photo at the top of the page with my Canons.

On election night in 2010, I was covering Terry Goddard's campaign for Governor. I used the GX1's predecessor, the GF1, to photograph Goddard's loss. The M4:3's small form factor and gentle click at the moment of exposure make it a less imposing camera than the large dSLR bodies and the loud thunk they make at the moment of exposure. I made a similar photo with the GX1 the night David Schweikert won his Congressional primary.

There are more photos from the Town Hall meeting in my archive.