Getting Ready for the Big Day 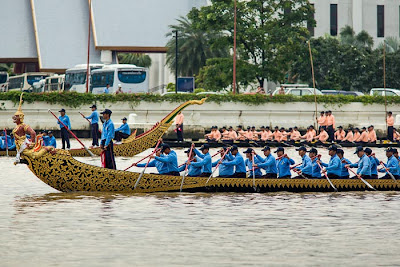 Oarsmen propel a Royal Barge down the Chao Phraya River in Bangkok Thursday.

I went down to the old part of the city yesterday to watch the rehearsal for the Royal Barge Procession. It was a minor adventure.

Normally I take the Skytrain down to the river, catch a river boat to the pier I want to go to and then walk to my final destination or take a cross river ferry if I'm going to Thonburi. The river boats weren't running Thursday because of the procession, so I went to a bus stop and hopped on a bus that meandered through old Bangkok before dropping me at the Grand Palace. From the palace I walked along the river front trying to take a ferry to Wat Arun, where the procession was supposed to end. I finally got to the right pier and was told that because of the Royal Barge Procession rehearsals, the ferries weren't running either. Which, when you think about it, makes perfect sense.

I wanted to be on the other side of the river, the Thonburi side, because I wanted to see the barges coming to shore. Instead I found a park bench facing the river on the Bangkok side and waited. A few minutes later the barges, rowed by more than 2,000 oarsmen, glided past me. Hundreds of Thais and few tourists waited along the riverbank.

The Thais were here on purpose - they wanted to see the barges. The Royal Barge Procession is a big deal. It's a massive undertaking that takes place only on a very special occasions. There have been just 16 processions during the 65+ year reign of King Bhumibol Adulyadej, the current monarch of Thailand. This year's procession will mark the end of Buddhist Lent and as a memorial from last year's floods, which devastated much of central Thailand.

The tourists were here by accident. They wanted to get across the river or take a river taxi but couldn't. Instead they got quite a show.

There are more photos of the procession in my archive.