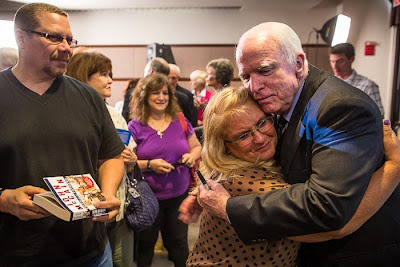 A woman hugs US Sen. John McCain after a town hall meeting in Peoria, AZ, Thursday.

Sen. John McCain had a town hall meeting in Peoria, a suburb about 20 miles northwest of Phoenix. He used the opportunity to talk about the importance of maintaining a strong military and repealing the health care reform bill passed by Congress a couple of years ago.

At a time when many members of congress are pulling back on their public schedules, McCain still has a full schedule of town hall meetings and an active public schedule.

Town hall meetings aren't usually very visual and photographing them can be a challenge.

Then I work the room to make a variety of pictures I like. Very tight, using a 200mm lens while only five or six feet from the politician. Very loose, using a 24mm lens from the middle of the room, and a variety of in between photos. I use my 50mm f1.2 and 24mm f1.4 at f1.2 and f1.4 to get photos with that razor thin depth of field that I really like.

I always arrive early and stay to the end. McCain, and most other congresspeople, interact with constituents and other elected officials before and after the event. These are usually the best photos, even if they're not the ones that get used. McCain's town hall meeting today was scheduled to go from 11:30AM until 12:30PM. I was there from 10:45AM until 1PM.

One of the photos I like from the event was one I made as McCain walked up to the microphone at the press conference before the town hall meeting. The press conference was held in an art gallery and McCain was surrounded by the art while he stood alone at the microphone. It was a fleeting moment - gone in seconds when McCain was joined at the mic by a gaggle of West Valley politicians.

The other photo I like is the one at the top of this blog entry. At the end of the town hall a woman approached McCain and chatted with him for a couple of minutes before he reached out and hugged her. That moment too was gone in an instant.

There are more photos from today's town hall, and other political town halls, in my archive.