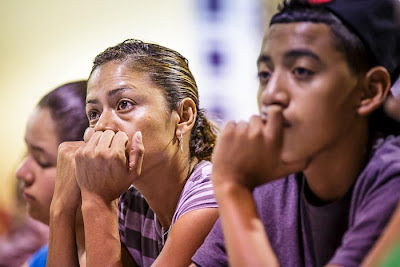 Young people listen to immigration lawyers describe their options under President Obama's recently announced "deferred action" program, aka DREAM Act Lite, during a workshop on the plan in Phoenix Saturday.

On June 15, President Obama announced that he would instruct the Department of Homeland Security to suspend the deportation of undocumented young people who meet very specific standards and that those young people would be able to get work permits and social security cards on a temporary basis (two years, but it's renewable). Some observers dubbed it "DREAM Act Lite." The announcement was met with widespread praise by immigration activists and supporters and condemnation by the right and Republicans.

Immigrants are still trying to sort out what the plan means. There are a couple of things it won't do though. It's not an "amnesty" or a path to citizenship or a free pass. It doesn't benefit the immigrants' parents, siblings, friends or family members. The focus is very narrow.

There are very strict requirements to qualify. For example, immigrants can't have any felony or serious misdemeanor convictions, they must have a high school diploma or GED or be in high school, they must have been in the US continuously since their arrival here (i.e. no hopping back and forth across the border). The government is charging nearly $500 to apply for deferred action and the process is so daunting that most people are going to have to hire a lawyer to work with them on their applications, so they have to figure legal fees into the cost of the application.

Immigrants would have preferred Congress pass the real DREAM Act, but given the make up of the Congress and anti-immigrant stand of the Republicans, that will never happen. So this was about the best the immigrants could hope for.

There are more photos from the workshop in my archive.