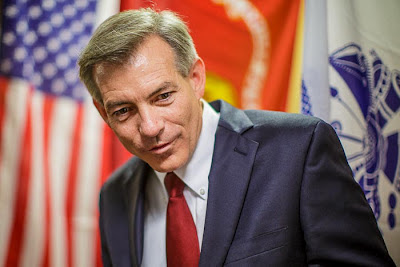 Congressman David Schweikert (R-AZ) talks to voters at a candidate forum in Scottsdale.

The most interesting congressional race in Arizona this year is the Republican primary in Congressional District 6. It's pitting two conservative freshman Republicans - David Schweikert and Ben Quayle - against each other in a no holds barred race. Both men are very conservative. They originally represented separate neighboring districts but redistricting after the 2010 census threw them into the same district. (Although each claims the other is a carpetbagger who moved into the district, which is safely and staunchly Republican, after the redistricting process was completed.)

Schweikert frequently campaigns on the platform that the nation is facing a fiscal cliff and that the future is worse than we could imagine.

Quayle rose to fame doing TV spots in his first race that called President Obama "the worst President in history." A claim he has since doubled down on.

It's a difficult call for voters in CD6. Despite what they say about each other, both Quayle and Schweikert are staunch conservatives who have more in common than they do differences.

During the candidate forum, it was hard to identify any differences. Pro-life? Check. Repeal health care reform? Check, check, check and quadruple check. Protect gun owners' rights? Check. Oppose the President on every point? You betcha.

Ultimately who Republican voters choose in this suburban district is going to come down to who they like more. There are more photos of the forum in my archive.
Posted by Jack at 10:50