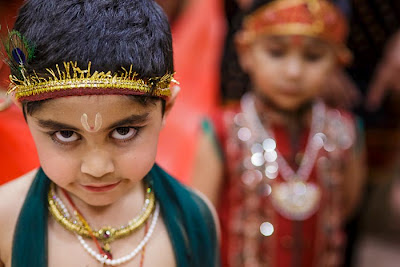 A boy dressed as the Lord Krishna waits to take the stage at Ekta Temple, a Hindu temple in Phoenix, on Sri Krishna Janmashtami, the day celebrated in the Hindu faith as the birthday of Lord Krishna. It's roughly analogous to Christmas in the Christian faith.

One of the things I love about being a photojournalist is that my cameras gives me entry into the lives of others. There are times when we're called to bear witness to things no one should have to see (the ongoing massacres in Syria come to mind), but most of the time we're invited to witness the wonders of everyday life.

I went to the Ekta Temple Friday night to photograph Janmashtami. I wasn't familiar with the holiday, but I thought it would fit nicely with the work I've done on immigration and spirituality - the Virgin of Guadalupe, Buddhist Lent or the opening of a Hindu temple in Maricopa for example. I didn't call ahead or contact anyone, I just showed up.

I always arrive at events like this early. I don't want to walk in as it's starting and risk offending people, I want to be early enough to talk to folks, explain what I'd like to do and make sure it's okay to photograph, especially when I'm covering a religious event.

When I got to the temple, I talked to the priest and temple president, they invited me to stay and photograph whatever I wanted.

The celebration itself was quite different from Christian, Muslim or Buddhist celebrations I've photographed.

It was very free flowing - women sang religious songs while people chatted on their phones and children ran around.

People prayed at shrines and priests guided people in offerings while traditional dancers performed at the front of the temple (where the alter would be in a Christian church).

It was loud and happy and sensory overload. It was great.

There are more photos from Janmashtami in my archive.