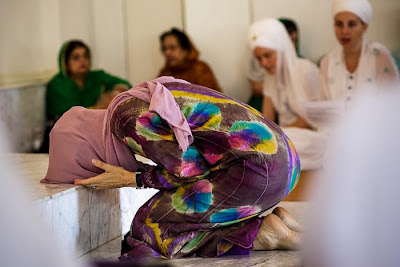 A woman touches her forehead to the floor during Sunday services at the Guru Nank Dwara Ashram Sikh temple in central Phoenix.

It was a week ago that a gunman went into the Sikh temple in Oak Creek, Wisconsin, and opened fire with a semiautomatic handgun. He killed six and wounded four before taking his own life after a shootout with responding police officers.

The shooter, Wade Michael Page, was a known white supremacist. It's not known what provoked his attack on the worshippers but this is not the first time Sikhs have been targeted by racists in the United States.

I went to the Sikh temple in central Phoenix today to photograph Sunday services and I was struck by the genuine hospitality of everyone in the temple.

I got to the temple in the middle of their morning snack break and was immediately invited to sit down and enjoy some home made pakoras and gulab juman, those tasty little dough balls served with sugar syrup. They're kind of like round pancakes. Several people stopped to welcome me to their temple and explain how the service was conducted.

It was my first time in a Sikh religious service. Although there are no theological similarities between Sikhs and Catholics, there were certain structural similarities in the services.

Both start with singing of hymns, both have call and response prayers and readings from a sacred text and both include a small bite of food. For Catholics it's communion, which represents the Last Supper. For Sikhs it's prashaad, a sweet pudding of flour, honey, water and ghee (clarified butter), which represents the Guru's blessing.

There are more photos from Sunday's service at the temple in my archive.
Posted by Jack at 20:07