Back at the Courthouse 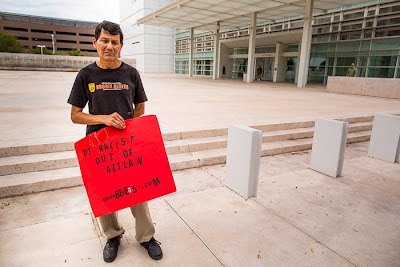 A solitary protester stands in front of the federal courthouse in Phoenix Tuesday.

Arizona's tough anti-immigrant law, SB 1070, is back in the federal courts and opponents of the law are back on street. The US Supreme Court struck down most of the law in June but let stand section 2B, the so called "Papers Please" section, which calls for local law enforcement to check the immigration status of people they have to reason to believe might be in the country without documents.

Opponents of 1070 argue that the law is inherently unfair. That it lead to racial profiling of Latinos, more discrimination against Latinos and that Latinos will face more time in detention while their status is confirmed.

Thousands of people took to the streets in 2010, after the passage of the law. I was in Thailand when SB 1070 was signed into law by Governor Jan Brewer and even in Thailand, passage of the bill and its signing into law was front page news.

In the midst of the Red Shirt protests, other journalists and Thais I met, when they learned I was from Arizona, asked me what was going on with SB1070. When I tried to explain the law as I understood it and how it wasn't that different from immigration laws in some parts of Europe or Thailand, the response was inevitably, "but it's America, you're supposed to be better than that." Our state was compared to apartheid South Africa, where black Africans were required to present their papers to move around the country.

Since then the protests have gotten smaller but no less impassioned. There were only a handful of protesters at the courthouse yesterday, most of them the "usual suspects" (to steal a line from the movie Casablanca) that I've photographed at the dozens of immigration protests that have taken place in Phoenix during the last five years. It's the same for Tea Party protests and rallies supporting SB1070, the crowds have gotten significantly smaller and most of the protesters are people I've photographed so often I know them by name.

Judge Susan Bolton is hearing this latest challenge to SB 1070. Judge Bolton heard the original complaint against the bill in 2010 and ruled against the state, a ruling that was upheld by the 9th Circuit of the Court of Appeals and mostly upheld by the Supreme Court. Trying to read a judge's mind can be a dangerous thing, but her past ruling, coupled by recent revelations that the bill's architect, Russell Pearce, had apparently racist motives, has bolstered the spirits of the law's opponents.

There are more photos from the small protest in my archive.