A Prayer for the Departed 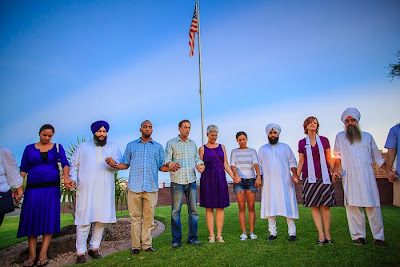 Members of Arizona's interfaith community gather Tuesday night to pray for the victims of the massacre at the Sikh temple in Wisconsin last Sunday.

About 60 people gathered at the Arizona Interfaith Movement offices in Phoenix last night for a brief prayer service in memory of the six people murdered by Wade Michael Page Sunday when the former soldier with racist beliefs attacked worshippers at a Sikh temple near Milwaukee. There were representatives from many of the Valley's religious traditions, Christian, Muslim, Scientologists, Bahais and other expressed thoughts for Page's victims.

The service was simple - no candles or music - just people holding hands in prayer. The service lasted less than 30 minutes. It was the first of several services in the Phoenix area this week for the victims of the massacre.

There are more photos of the service in my archive.
Posted by Jack at 15:23