A Hot Time in the Old Town 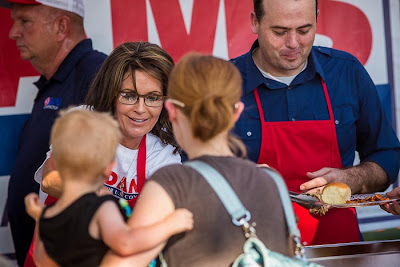 Sweat pours down Sarah Palin's face while she serves barbecue with Kirk Adams (right) during an Adams campaign event in Gilbert.

It's always news when the "Mama Grizzly" comes to town. Monday she was in Gilbert to campaign for a select few Republican candidates running in congressional primaries. Arizona, especially the East Valley suburbs, is Tea Party country and anyone elected out of the East Valley is going to have strong Tea Partyesque leanings, so picking a candidate to support comes down more to personal likes and dislikes and less about actual policy positions.

Palin is supporting Kirk Adams, who is running against Matt Salmon, for Congressional District 5; long serving Congressman Jeff Flake, who is running against Wil Cardon, for US Senate and incumbent Rep. Paul Gosar (elected in the GOP sweep of 2010) who is facing two primary challengers. Only Adams was at the event. Flake and Gosar had other commitments.

The rally was at Joe's Farm Grill in Gilbert and it was outdoors.

"Zonies" pride themselves on their ability to take the heat, kind of in the same way Minnesotans embrace winter's icy grip. But still, it was outdoors, it was 107˚ (that's about 42˚ for my friends in a Celsius world) and it was miserable. Palin delivered a short speech to the crowd. Even though many were wilting in the heat, they embraced her ideas and message.

After the speech, Palin and Adams served barbecue to the nearly one thousand people who waited patiently in 107˚ heat for a chance to meet "Mama Griz in Chief."

There are more photos from Gov. Palin's appearance in my archive.