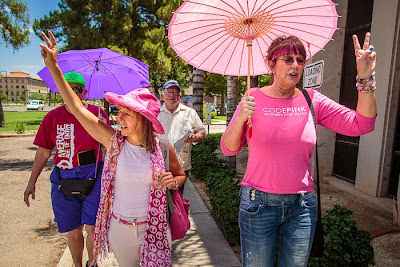 Medea Benjamin, a co-founder of Code Pink and Global Exchange, was in Phoenix today promoting her new book, Drone Warfare Killing by Remote Control. She met with some members of the media before going to Governor Jan Brewer's office to deliver a letter asking the Governor to rethink her plan to turn Arizona into a testing site for drones. Benjamin cited civilian deaths in Pakistan and Afghanistan, the extra judicial killing of US citizens in Yemen, possible constitutional issues related to the 4th amendment and the expense of drones as reasons to keep Arizona's skies drone free.

Arizona is already being used as a drone test site. Customs and Border Protection (CBP) flies drones over the southern border looking for undocumented border crossers and drug smugglers.

Their use has been controversial and fraught with problems. They've crashed and they require one hour of maintenance for every hour of flight time, making them very expensive.

Then there are the constitutional issues. US CBP drones were used in North Dakota when a farmer lost six cows. Local law enforcement asked CBP to use its eye in the sky to scope out a family on the ground. The drone's use led to the arrest of a North Dakota farmer and his family on weapons charges. It was one of the first known uses of drones in domestic law enforcement unrelated to terrorism. The American Civil Liberties Union has spoken out against the use of drones for domestic law enforcement.

There are also unintended consequences to drone use. The International Herald Tribune (the global edition of the New York Times) has an excellent opinion piece on the impact of long distance, remote controlled murder.

I photographed the drones' first use in southern Arizona several years ago and the press conference today. Those photos are in my archive.