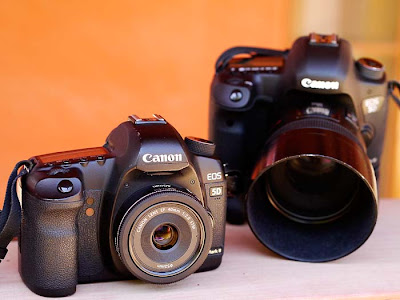 The new zoom doesn't interest me at all. I went back to "prime" lenses in 2006, shortly after I got the original 5D full frame body. My lenses run to the fast side of the spectrum - the 24mm f1.4 L, 50mm f1.2 L, 100 f2 and 200mm f2.8, the extra lens speed gives me more control over depth of field, something I've written about before, and the primes make my kit smaller and lighter than it would be with zooms that cover all of those focal lengths.

The 24mm and 50mm are big honkin' lenses, but they're still fractionally smaller and lighter than the L series f2.8 zooms. They're are also sharper. There's no comparison on the 100 f2 and 200 f2.8. Both are great lenses (especially for the price) and positively petite compared to the 70-200 f2.8 L zoom. The zooms are undeniably more flexible than the primes, but I prefer to "zoom with my feet" lens and use the primes.

That said, I found I had a gap between the 24 and 50 that was sometimes hard to fill.

Canon's excellent but very expensive (and heavy) 35mm f1.4 L lens was one option but it wasn't what I wanted. It is too expensive to add to my kit and so big that it would wipe out the size/weight advantage. I thought about the much cheaper 35mm f2 but that lenses has gotten too expensive in the last couple of years (because of the falling dollar vs yen exchange rate), at $320 it wouldn't provide a very good bang for buck. Earlier this year Canon announced the new lenses and the 40 immediately caught my eye.

But in real life this lens whole is much greater than the sum of its parts. This thing is tiny. It's less than an inch front to back. It weighs next to nothing. It slips into the front pocket of my blue jeans. It's smaller than a tin of Altoids. I've been using a 40mm equivalent lens on another camera, so it's a focal length I know and like. It's exactly what I was looking for. The icing on the cake? At less than $200 it's cheap. The fine folks at Foto Forum on 7th Street in central Phoenix set me up with one last week.

I really like this lens. I used it at the Prescott 4th of July Parade Saturday and it didn't disappoint me. It's very sharp, even wide open. The bokeh is okay (for an inexpensive f2.8 lens, but no one will ever mistake this for one of the super fast "L" series lenses) and it's so small that it takes some getting used to. Flare is very well controlled, even without a lens hood. I normally use lens hoods, but on this lens it would just about double the size of the lens and eliminate some of its pancake nature. Make it more of a cupcake.

I tend to favor short lenses and I see this lens getting a lot of use when I'm doing street photography in Asia. I sometimes find the 50 a little too long in the markets and other crowded spaces and the 24 is great when I'm in really tight space but it's pretty wide at normal working distance (which is one reason so many photographers favor the 35mm prime lenses). The 40 fits this niche perfectly.

Is this lens right for everyone? Probably not as a main lens. For people who have "cropped" bodies (Rebel series, 50D, 60D, 7D etc) the 40mm works out to be about 62mm, which might be a little long for general use. As a backup or second lens though, this might be perfect. For folks with full frame bodies, (1Ds, 5D series, 1D X) it's a no brainer. This is the best $200 lens on the market. 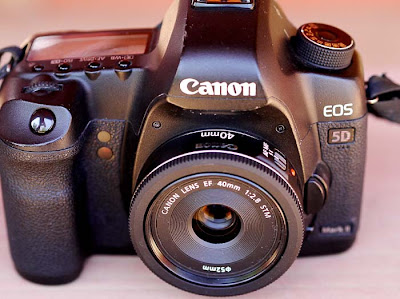