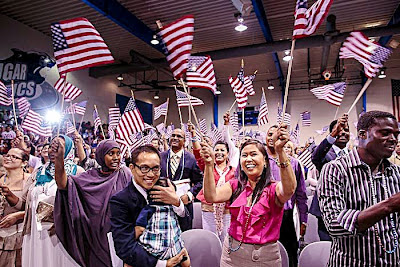 People cheer and wave American flags after they were sworn in as new US citizens Wednesday.

The 4th of July usually means barbecues and fireworks, parades and patriotism. But for 250 people in Phoenix and thousands more across the country it means a new beginning because it's the day they become naturalized US citizens. In a ceremony that has become a Phoenix tradition, the US Citizenship and Immigration office and South Mountain Community College hosts the "Fiesta of Independence," the largest naturalization ceremony in Phoenix.

It's also one of my favorite things to photograph each year. This year was no different. It's a chance to see what really makes America great. Ours is a country that is constantly reinventing itself, rejuvenating itself as new immigrants become new citizens. They bring their culture, their food, their music and it gets thrown into the great American stewpot. Eventually their food and music becomes our food and music. No other country in the world can claim that.

There are more photos from today's ceremony in my archive.