Another Day in Birther Central 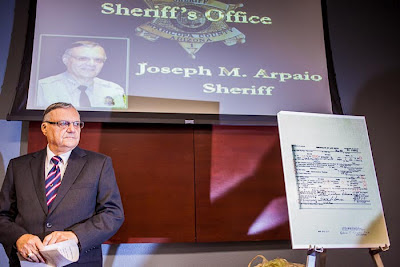 Sheriff Joe Arpaio stands at the podium next to an enlarged copy of the President's long form birth certificate.

During the 2011 legislative session, the Republicans passed a law that would have required the President to show his birth certificate before registering to run in Arizona. The Governor, a Tea Party favorite, vetoed it, a move that surprised many people and angered the extreme right.

The GOP tried to bring the bill up again this year, but calmer heads prevailed and it never came to a floor vote.

But a few Tea Partiers in Surprise (which is both a city and state of mind in that part of the valley) remain unconvinced of the President's birth place so they called the Sheriff to say they had been defrauded and the Sheriff, always quick to solve a crime (unless it involves child sex abuse) put his "posse"and a volunteer investigator on the case. They determined (after a trip to Hawaii that cost the taxpayers tens of thousands of dollars) that the President's birth certificate is a fraud.

The Sheriff released the Posse's findings during a wild press conference Tuesday afternoon. First he said only mainstream media would be admitted - a clear effort to keep Phoenix' alternative newspaper the New Times out - then he said he would answer questions but not questions related to cost of the investigation, the trip to Hawaii (one deputy reportedly ate more than $1,000 worth of food in nine days) or the bungled sex crimes investigation. At one point he ended up shouting at Morgan Lowe, a reporter at KPHO. Why? Because Lowe didn't start his question by saying "I'm Morgan Lowe from KPHO." Seriously.

No one I know is surprised by this. Arpaio's fighting a losing battle against the administration. The Department of Justice is suing him for racial profiling and an ACLU lawsuit against him starts Thursday. Some people think the Sheriff's "investigation" is a counter attack against the administration and an effort to draw attention away from the problems he is facing.

There are more photos from the press conference in my archive.