And That Ain't No Bull 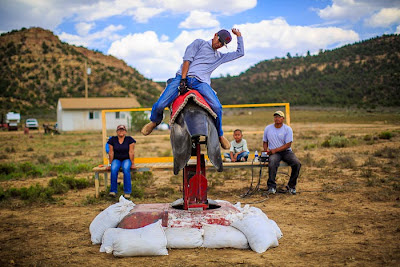 A bullrider bucks out a mechanical bull east of Oak Springs on the Navajo Nation.

I stopped at a bull riding class in Oak Springs, about 15 miles south of Window Rock, last weekend after the I photographed the camp meeting.

The Navajo Nation is the largest Indian Reservation in the United States. It stretches across a huge chunk of northern New Mexico, northern Arizona and southern Utah. Cattle ranching is big part of the economy. Where there's cattle, there's cowboys and where there's cowboys, there's bull riders.  Cowboying and rodeo isn't just a notion on the Navajo Nation, it's a way of life.

Students learn the basics of bull riding on a mechanical bull, in this case set up in a picturesque spot in the desert, then graduate to riding "rank" steers and a bull in a small rodeo arena.

There are more photos from the bull riding workshop in my archive.