A Prayer for a Court Decision 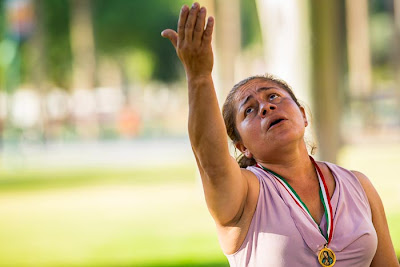 The US Supreme Court is expected to hand down its decision on SB 1070, Arizona's tough, and controversial, anti-illegal immigration bill soon. The bill, signed by Gov. Jan Brewer in 2010, has galvanized the immigrant community because they fear it will lead to racial profiling and greater discrimination towards Latinos.

The bill requires local law enforcement to check the immigration status of anyone they encounter during a "lawful detention, arrest or stop" in the normal course of their job and they suspect might be an undocumented immigrant. It's that last part that worries immigrant rights activists. They worry that someone pulled over for something as trivial as a broken tail light could end up in jail and being deported, regardless of their citizenship status, just because they don't have their papers.

There is some basis in fact for their concern. The Maricopa County Sheriff's Office is being sued by the US Department of Justice for widespread racial profiling. Deputies have, on more than one occasion, arrested US citizens of Hispanic descent for being illegal immigrants just because the person couldn't prove their citizenship on the spot. During a recent protest, Phoenix police officer arrested a number of people for blocking traffic, Anglos and Hispanics received markedly different treatment during their detention.

The Court's ruling was expected today. I went down to the Capitol to photograph the reaction. There were a handful of people on the lawn in front of the building, conducting a prayer vigil against the bill. For a long time I was the only journalist there. I made this photo when Sanchez, a leader in the immigrants' rights movement, stood to lead a prayer during the vigil. I thought her expression mirrors the expression we frequently see on a suffering Christ figure. A little after 7:00AM word came that the court would not release any rulings Monday, so everyone went home with plans to come back on Thursday, the next day the ruling could come down.

There are more photos from today's vigil, and SB1070 in general, in my archive.