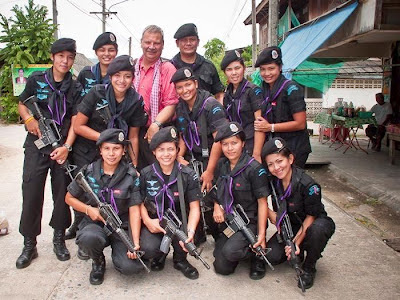 I am somewhere in the picture above. A free prize to the person who correctly identifies me (not!). With Thai Paramilitary Rangers in the southern province of Pattani, when I was working on a story about the Muslim insurgency in southern Thailand.

I've been a photojournalist for as long as I can remember. Even when I didn't know the word "photojournalist" photojournalism is what I was doing. Or trying to do. I started carrying a camera in 6th grade. We were living in Thailand and my father bought a Canon FT-QL at the PX in Bangkok. He bought it as his camera but somehow I always ended up toting it around.

I guess the answer to what I wanted to be was in what I was doing while others were talking about what they wanted to be.

In High School I was the yearbook photo editor. I don't have that yearbook anymore, but I still remember learning to think in picas rather than inches and learning math by figuring out how to alter development times for film based on how the film was exposed. I was never very good in the darkroom and I still suck at math.

I lost the camera when I went to college. It stayed with my father. I went to Hamline University, and worked for a while as a reporter and editor at the student paper but it was never as much fun as being a photographer.

Even though I was a reporter, I was still drawn to photography. I worked part time at a now long defunct camera store and processing lab. I ended up buying a camera, a Fuji ST605 35mm SLR that accepted M42, "universal screw mount," lenses, while I worked there.

That old Canon FT-QL and then the Fuji are what set me on the path I'm on today. When I graduated from Hamline I didn't know what I was going to do and drifted for a while, the whole time making pictures. My wife pointed out that the photography thing was kind of an expensive hobby and suggested I should find a way to make money at it. To me that was a novel thought; get paid for doing something you love to do.

I went back to graduate school at the University of Minnesota to work on a Master's Degree in Photojournalism. The summer after my first year, I got an internship at the Brainerd (MN) Daily Dispatch, fell into a job at the Fergus Falls (MN) Daily Journal at the end of the summer and never went back to school. For all I know, the U of M is still carrying me as a student.

Not many people can say their career paths were serendipitously set when they were in Junior High. Mine was. I've been a paid newspaper staff photojournalist since 1984. I've worked at newspapers in Minnesota, Florida, New York, Texas and, for the last 13 years, in Arizona. My wife has moved with me to Inverness and Ocala (Florida) to Poughkeepsie (NY), El Paso and Phoenix. We've been in Phoenix longer than we've ever been anywhere.

Friday that streak ended. Newspapers are retrenching. The Arizona Republic has been through some gut wrenching layoffs. Unpaid furloughs have become the norm and pay raises are a thing of the past. Our readership has moved to the web and our advertisers have moved with them.

This is not a problem unique to the Republic or Gannett. Newspapers across the country are wrestling with the same issues. Hardly a week goes by when layoffs, buyouts and furloughs aren't announced at some newspaper in the country. Through the retrenchment I've survived and my editors at the paper, even when I've pointedly and loudly disagreed with them on stories and photos, have supported me. For that, I am grateful.

The Republic's newsroom is being reorganized. Again. As a part of the reorganization, the job I've been doing most recently, night photo editor, is being reconfigured. Friday afternoon I was offered the new position, it was a sincere offer and I thought about it, but in the end I chose to decline and instead accepted a separation package. It was the kick in the pants I needed and I felt great after I crossed the t's  and dotted the i's.

Today is a day of firsts. It's my first day of official "unemployment" and my first day as a freelance, no staff safety net, photojournalist.

Where do we go from here? Freelancing is always where my heart was - I thought a newspaper job would be a stepping stone to a freelance career. (I think a lot of photographers feel the opposite, they hope freelancing will lead to a staff job). The photographers I most admire are magazine freelancers. People like Maggie Steber, Bob Krist and Bill Allard. I've taken workshops from all three and to this day I consider them friends.

In 1988, I was ready to leave newspapers and freelance in Nicaragua. We couldn't afford it and I didn't have the courage to take the leap. In 1994, I took a leave of absence to work on personal projects in Mexico for three months. It was a great experience and I didn't want to come back but again, lacked the courage to commit to life without a steady paycheck. In 1999, after a workshop with Maggie, I was ready to commit to freelancing. Instead, I applied on a lark to the Arizona Republic. To my surprise, I got the job and we've been here since.

Yesterday, I committed to a life without a steady paycheck. It's been years in the making.

We've been traveling to Southeast Asia regularly for the last six years or so. At one point in Bangkok I made the observation to my wife, sort of as a joke, that Bangkok could be "Plan B," I could freelance in Bangkok when I get laid off. We started looking at apartments, first just to see what there was, but later with the real goal of finding a place.

So that's the plan. Monday, I file for unemployment and Gannett's transitional pay plan and start looking for a job. If I don't find the right job by the end of August, I head to Bangkok to try to freelance. We've given me a year to get established in Bangkok. If it doesn't work out, I come back and work in the Apple store.

In the meantime, I'll be around. You can follow my wanderings here at the blog, on Facebook or through email. My photos are available from my website or at ZUMA Press. Reach out.
Posted by Jack at 07:30