The first in an occasional series of blog entries about preparations for my move to Bangkok. 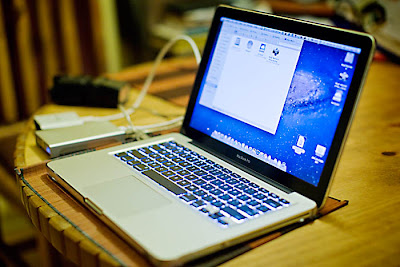 I'm putting together the last of the gear I'm taking to Thailand. I have all of my actual camera gear set: camera bodies, lenses, flashes, bags etc. I already have most of my compact flash and secure digital cards. The only big expense left was a new Mac laptop.

My current laptop is a 2009 13 inch MacBook Pro. It's been a great little computer. Like all the Macs that I've owned, it's bulletproof. From the hardware to the OS to the installed software it's never given me a second of trouble.

But it's starting to show its age - editing 20+ megapixel raw files from Canon 5D Mark III and Mark II bodies was torturously slow. Editing video? Virtually impossible. I maxed out the RAM last year and that helped a lot, but compared to my other computers it was no contest.

The little MBP couldn't hold a candle to my 2011 model 27 inch iMac or the company provided 2011 vintage 15 inch MacBook Pro I was using before my layoff. The new computer would be my main computer in Bangkok and I just couldn't face editing the number of photos I'm going to be making on the old MBP.

Factors tipping me to the MBA were:
1) Lighter weight. This can be a big deal when you're toting the computer all day.
2) Solid state storage, which is significantly faster than a spinning hard drive and a lot more robust but also much more expensive per gigabyte of capacity.
3) A better screen. The MBA has a beautiful 1440 X 900 (pixels) screen, the MBP has a very nice 1280 X 800 screen. The MBA screen is actually the same resolution as the 15 inch MBP.
4) As computers go, it's a very sexy computer.

Factors tipping me to the MBP were:
1) Cost. The base cost of the MBA is the same as the base of the MBP - both start at $1200 - but the MBA is not as well configured.
2) No Firewire. All of my legacy hard drives are Firewire and while they're also USB 2.0, Firewire 800 leaves USB 2.0 in the dust, when I'm moving gigabytes and gigabytes of data around, I don't want to deal with USB transfer times. I am taking four portable hard drives, all of them Firewire, so FW connectivity is a big deal.
3) Ethernet. The MBA doesn't have built in Ethernet, the MBP does. Most of the hotels I stay in have wifi in the room, but in my experience a wired ethernet connection is both more reliable and faster. During our recent trip to Vietnam, all of our hotel rooms had in room Ethernet and in every case it was faster and more reliable than wifi. Hotels I stay in Phnom Penh and Bangkok have in room Ethernet. Ethernet's not a deal breaker for me, but it's definitely a plus.
4) Storage. The MBA maxes out with a 512gb SSD, the MBP maxes out with a 750gb traditional hard drive. When you can generate 80gigabytes of photos in one day, the 240gb difference becomes significant. (Note that 80gb figure represents a raw, unedited, take. By the time I do a hard edit - deleting dupes, bad frames and photos I just don't want to keep, I get the number down to less than half that. But I'm still working with 80gb of data at the start of the process.) Although I travel with external drives, I want to have enough internal storage to get me through at least four days of shooting in case I take a short out of town trip.
5) Footprint. Both have the same footprint on a desk or in-flight tray table. Technically that makes it a wash but in my mind the tie goes to the more complete MBP. Likewise battery life on both is an identical seven hours.
6) Overall configuration, price per feature ratio. To me, this was the most telling factor and what ultimately swayed me. A maxed out MBA, with a 2.0ghz Intel i7 processor, 8 gigs of RAM and a 512gb SSD is $2200. On top of that I would have to buy Thunderbolt to Ethernet and Thunderbolt to Firewire connectors (at least $30 each) or a Thunderbolt docking station ($400) to get the same connectivity with the MBA that the MBP comes with. It quickly adds up. A MBP, with a faster 2.9ghz Intel i7, 8gigs of RAM and 750gb spinning hard drive is $1500. It's not unreasonable to think the $700 difference could quickly become a $1000 difference by the time I finish getting the accessories I need to get the connectivity offered by the MBP.

I started the new laptop process really wanting a MacBook Air. They're gorgeous laptops, they're fast and by all accounts extremely reliable.

Ultimately I ended up with the MBP. It has Ethernet and Firewire, both features I need. It has a 750gb hard drive, which should be enough storage to get me through a week or so of shooting. (I will address this in a future entry on workflow.) It has a faster processor, which is icing on the cake.

Remember this is going to be my main computer for at least a year in Bangkok. (I will be taking my old 2009 MacBook Pro as a backup.)

If I had a current 15inch MBP or was taking my iMac to Bangkok and the new laptop would be a backup/road warrior to either of those, I would have ended up with a MacBook Air. In that case it would probably have been the 11 inch model, an impossibly tiny fully functional Macintosh.

There are lots of photos from Thailand in my archive.

This is the first in a series of entries on my planned move to Bangkok. Future topics will include my photo editing workflow, the software I install on my computers and the cameras I'm taking.
Posted by Jack at 23:12