The Court Makes a Decision 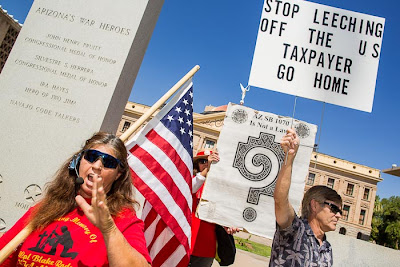 SCOTUS ruled Monday on the legality of SB1070. They struck down most of Arizona's tough and controversial immigration law, but let stand what some consider the most egregious portion, the "Papers Please" passage which requires local law enforcement to check the immigration status of people they suspect of being illegally in the US. Overall, the state's efforts were soundly rejected by the Court. However immigrants' rights group and civil rights advocates are concerned the "Papers Please" section will lead to widespread racial profiling. The Obama administration agreed with them and immediately rescinded 287g authority from Arizona law enforcement and then set up hotlines for people to report suspected profiling to the Department of Justice.

Jan Brewer, Arizona's finger wagging governor, claimed victory because one small part of the bill was left standing, but most other analysts called it a loss for the state and big win for the government.

There were protests and press conferences at the capitol all day and a protest at the ICE office in Phoenix in the afternoon.

There are more photos from the day's activities in my archive.