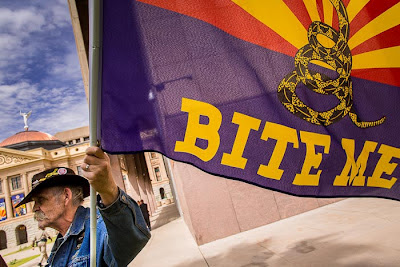 After a quiet couple of years, SB 1070, the tough anti-illegal immigration bill the Arizona legislature passed and Gov. Jan Brewer signed in 2010 is back in the news. The US Supreme Court heard the case Wednesday.

In the run up to the hearing, opponents and supporters of the bill gathered at the Arizona capitol to press their case.

Promise Arizona, a civil rights group, sponsored a vigil at the Capitol in the days leading up to the hearing and the Tea Party held a press conference outlining their support of the bill. Although there were far more opponents of the bill at the Capitol, public opinion polls generally show support for the bill.

The court, which has shown a strong conservative bias in recent years, is expected to hand down their ruling sometime this summer. If they uphold the bill, I expect there will be a lot more protests against it.

There are more photos of SB1070 protests in my archive and available from ZUMA Press.

And students marching to the Capitol to protest the bill: 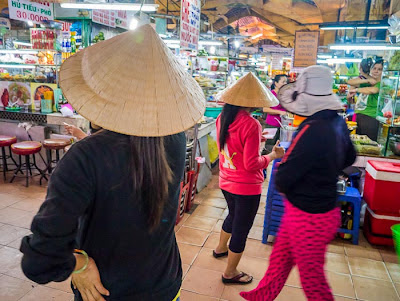 This is our last day in Vietnam. We fly back to Phoenix very early Saturday morning and thanks to the International Date Line and the physics of flying west to east we arrive in Phoenix 10 hours after we leave Ho Chi Minh City.

Ho Chi Minh City is a bustling, remarkable place. For many Americans, especially for those over 45 or so, it might be hard to separate modern Ho Chi Minh City from 1960's Saigon. The Vietnamese have built a whole industry around War Tourism. There are museums across Vietnam dedicated to the Vietnamese struggles against outsiders (not just the US but also the French and Chinese). The famous hotels of the war, the Rex and the Caravelle, which fell into disrepair after reunification, have been renovated and now outshine their old selves. They are still popular with people who are drawn here by memories, good and bad, of the war years.

Ho Chi Minh City is a lot more than Saigon (but truthfully the word "Saigon" evokes a sense of place and rolls off the tongue in ways that "Ho Chi Minh City" never will). It's a city of nine million people, the commercial center of southern Vietnam and one of the fastest growing cities in the world.

We leave HCMC at 5:30AM and arrive in PHX at 3:30PM. Sadly, those are local times. HCMC is 14 hours ahead of Phoenix. We leave here at 3:30PM Friday Phoenix time and get into Phoenix at 5:30AM Sunday Vietnam time. I think.

Actually, if I spend too much time thinking about it my head starts to spin. Whether it's 10 hours or 24 hours, it's a long time on airplanes and in airports. And lots of "jet lag." I don't know why, but coming back to the US from Asia is always harder for me than coming to Asia. The jet lag coming over is bad for about a day, but coming back it can last a week. I'm sure there's a scientific reason for it, I just don't know what it is.

If you've been following this trip on Facebook you might think we've done nothing but eat. That's not true, it's just that most of the Facebook photos have been of our food. This has been a pretty productive trip, we've seen and done lots.

There are photos of more than just food in my archive.

Email ThisBlogThis!Share to TwitterShare to FacebookShare to Pinterest
Labels: My Work, Travel, Vietnam 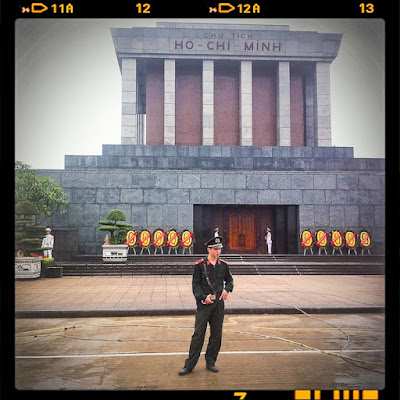 A Vietnamese policeman on duty in front of Ho Chi Minh's Mausoleum in Hanoi.

We walked up to Ho Chi Minh's Mausoleum in Hanoi Sunday afternoon. It's one of the places in Hanoi almost everybody goes to. There's a large park in front of the mausoleum and a museum, other parks and government buildings all around it. It's a little like the National Mall in Washington DC. Even though the mausoleum is closed on Sundays, the area is usually crowded with Vietnamese and tourists seeing the sights. The public is not allowed to walk up to the mausoleum, which is huge but looks like a Soviet era complex (understandable since Soviet architects reportedly designed it) and not much like a Vietnamese holy place. And to millions of Vietnamese it really is a holy place. Ho Chi Minh is revered throughout much of the country as the founder of modern Vietnam, the man who led the Vietnamese out of the darkness of colonialism.

I photographed the mausoleum with my "real" cameras: my Canon 5D Mark III and an assortment of lenses from my 24mm all the way up to my 200mm. I don't have any of Canon's tilt/shift lenses and that's really what this needs to keep all those perpendicular lines perpendicular.

Even though I used all my real gear on this, the photo I liked the most is this one, made with my iPhone 4 and an app called Lens+. The file size isn't what I would like, but I like the snapshot feel and I really like the body language of the police officer in the foreground. I've been using my iPhone camera a lot on this trip, mostly to photograph food we're eating in restaurants and noodle shops, but also occasionally for more serious photos.

I wish I had this serious photo on a real camera. It's the fleeting nature of "capturing the moment" that by the time I put my iPhone away and brought up my real camera the officer had moved on and two street cleaners had wandered into the photo.

There are more photos from the Mausoleum in my archive and available from ZUMA Press. 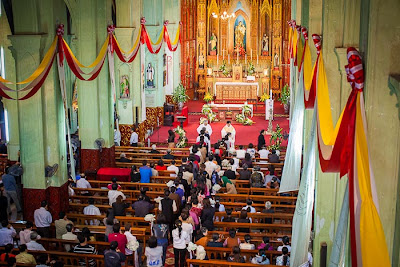 We went to Easter Sunday services in Hanoi's St. Joseph Cathedral this morning. There are more than 5.6 million Catholics in Vietnam, almost 7 percent of the population. Catholics' history in Vietnam has sometimes been stormy.

That was then and this is now. After years of persecution, Catholics (and Cao Dai and other religious minorities) are allowed to practice in relative freedom. The Cathedral was packed this morning and not just with older people but with Vietnamese of all ages. The Cathedral held four services in Vietnamese today (and one in English for the ex-patriot community).

There are more photos of Easter services in my archive and available from ZUMA Press.

The Lure of the iDevice 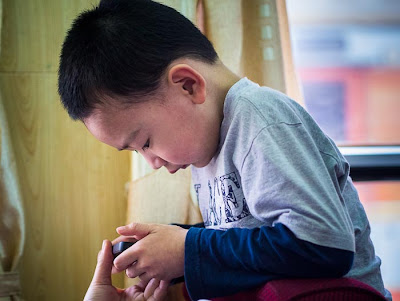 A Vietnamese boy plays with a passenger's iPhone on the Hai Phong to Hanoi train. He was playing "Angry Birds" and from the sounds coming out of the phone, it was not his first time with an iDevice.

We took the train from Hanoi to Hai Phong yesterday, had lunch in Hai Phong and then rode back to Hanoi. It was a great little day trip. The train leaves from Long Bien Station in Hanoi, crosses the Long Bien Bridge and then rattles onto Hai Phong. It's called an "express" train and it only makes a couple of stops along the way, but it still takes 2 3/4 hours to go 102 kilometers (about 60 miles).

The Long Bien Bridge is a remarkable structure. It was designed by Alexandre Gustave Eiffel, the same architect who designed the tower in Paris. Built at the turn of the 20th Century, for a long time it was the only link between Hanoi, the capital (even during colonial times) and Hai Phong, the principal sea port. The bridge was bombed repeatedly during the American War (what the Vietnamese call the Vietnam War) and rebuilt each time. Several of the original spans were completely destroyed by American bombs, but the bridge still has a certain solid grace.

The boy on the train was entranced by the passenger's iPhone. He crawled over his seat to get to it and the passenger, a Japanese tourist, was very accommodating, letting the youngster play to his heart's content.

One of the things that surprised me about Vietnam was the absolute mania that surrounds the iPhone and most things Apple. There are stores (stores plural) selling iPhones on every block in the parts of Hanoi we've explored. Pictures of the late Steve Jobs adorn several store fronts. iPads and MacBooks are also for sale in many outlets. The iPhone is clearly the king but the iPad also sells quite well here. Many of the stores also sell Android devices, but Vietnamese prefer the Apple products. That's astounding when you consider how expensive those devices are here relative to what they cost in the US.

Per capita income in Vietnam is only about $1,200 (US) per year. An iPhone can cost up to six months salary for the average Vietnamese. An iPad costs nine months salary and a Vietnamese would have to put aside every dong he or she makes for at least a year to buy a MacBook.

There are more photos of the Hai Phong train in my archive and available from ZUMA Press. 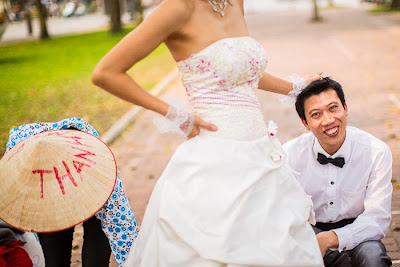 I love doing street photography in Asia. We stumbled on this scene walking around downtown Hanoi Monday. We walked up to a tiny park near the Metropole Hotel and the real Hanoi Hilton. (The hotel, not the prison camp.)

There were dozens of couples in the park in various stages of formal wear, some in fancy party dresses and some in wedding wear, all working with photographers they had hired to make their pictures. I wandered around the park photographing people getting ready to be photographed. The Vietnamese were great sports, letting me do my street photography thing while their photographers did the formal portraits. I think it was fun for everyone. It was certainly fun for me.

There are more photos from Vietnam in my archive and available from ZUMA Press.