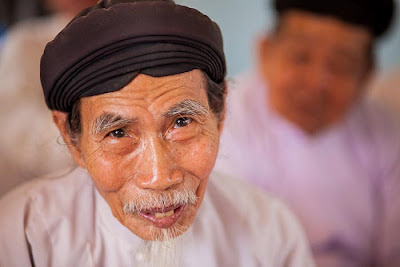 A Cao Dai believer waits for noon services to start at the Cao Dai Holy See in Tay Ninh, Vietnam.


We went to the Cao Dai Holy See yesterday. Caodaiism is a home grown Vietnamese religion that blends elements of Christianity, Confucian, and Buddhism. It's a syncretistic, monotheistic religion. Their saints include  Buddha, Confucius, Jesus Christ, Muhammad, Pericles, Julius Caesar, Joan of Arc, Victor Hugo, and Sun Yat-sen. By any definition, a pretty diverse group. As world religions go, Cai Dai is a baby. It wasn't founded until 1926 in Tay Ninh.


There are anywhere between 2 million and 6 million Cao Dai adherents. Almost all of them are in Vietnam, though there may be 30,000 adherents in Europe and the US following the Vietnamese diaspora of the late 1970's. The Cao Dai have had a stormy history in Vietnam. They battled the French in the colonial wars and fought against both the Communists and Vietnamese regimes supported by the US until 1975. Cao Dai were persecuted by the Vietnamese government until 1997.


The Cao Dai have a large role in Graham Greene's "The Quiet American." Graham portrayed them as a "third force," neither Communist nor colonialist, that could guide Vietnam in the post colonial world. That didn't work out to well.


There are more photos of the Cao Dai in my archive and available from ZUMA Press. 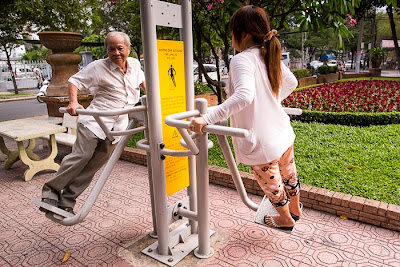 People work out on exercise equipment in a park in Ho Chi Minh City.

We're in Vietnam, traveling from Saigon to Hanoi and then spending some time in and around Hanoi. I know it's not Saigon anymore, after reunification in 1975 the name was officially changed to Ho Chi Minh City. But to people of a certain age, and to almost all Vietnamese, it's still Saigon. There's a rivalry between Saigon and Hanoi. Hanoi is older, more than a 1000 years old. Saigon didn't become a part of the Vietnamese empires until the late 1600's. So score one for Hanoi. On the other hand, Saigon is THE big city with more than 9,000,000 people. Score one for Saigon. Like the LA - NY debate in the US, the Hanoi - Saigon debate could go on forever with no clear winner.

I made this picture while we were walking back to our hotel. The woman was on the machine by herself and it just didn't click for me. We walked to a nearby corner and stopped to take a last look at the park and the man had gotten on the machine and started exercising. I like the symmetry of the two people on the machine and walked back to photograph them. I really liked this frame, the way the man is really getting into it. This park is a beehive of activity early in the morning with older people doing all sorts of exercise.

There are a lot more photos from this trip in my archive or available from ZUMA Press.

Up, Up With Education; Down, Down with Deportation 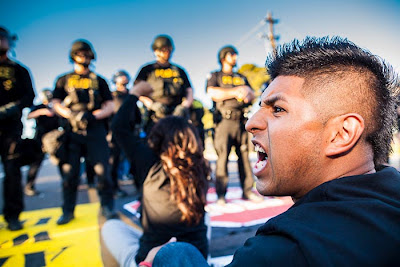 A student chants "Up, Up with Education; Down, Down with Deportation" during an immigration protest at Trevor G. Browne High School in Phoenix Tuesday. He was arrested moments later.

A couple of hundred young people blocked 75th Ave, in front of Trevor G. Browne High School, in Phoenix Tuesday. They were protesting Sheriff Joe Arpaio's anti-immigration enforcement practices and rallying in favor of the DREAM Act. They blocked a major thoroughfare in Phoenix for a couple of hours before the police came and arrested six of the protesters who had agreed to be arrested before the protest began.

There's an element of street theater to protests like this. The demonstrators swarm an intersection and block it, making a mess of traffic. Police respond, usually within minutes. The protesters' spokesperson talks to the police officer about their plans. The officer calls backup. The protesters chant and unfurl banners. Police reinforcement show up and approach the protesters waiting to be arrested, while the other protesters, who don't want to be arrested, get off the road and step on to the sidewalks. The reinforcements warn the remaining protesters, who don't move. The officers then arrest them.

Tuesday's protest was no exception and went exactly according to the script. Even though it was peaceful and well planned, emotions still ran high - the shouts and chants were loud and continuous. I was out there for almost three hours but most of the photos were made in the last 45 minutes, when the "riot" police showed up and the young people were arrested.

There are more photos of the protest in my archive.

Another Year, Another iPad 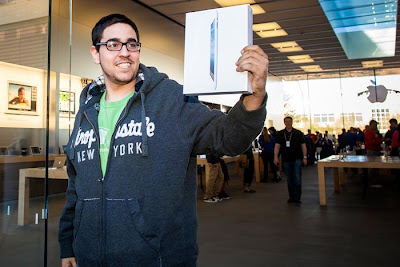 The first person in Scottsdale to score the new iPad walks out of the Apple Store at the Scottsdale Quarter with his toy.

You've got to hand it to Apple, they know how to make stuff people want. In this economy, at a time when other industries and other companies within the tech industry are suffering, Apple roars ahead.

This week it was the New iPad (or is it the new iPad - all I know is that it's not the iPad 3). The first day of new iPad sales was no different. At the Apple Store in Scottsdale, (by far the nicest Apple Store in the Phoenix area) there was a long line of people waiting to get their hands on an iPad. The man in the photo got to the store at midnight - a full eight hours before the store opened. He was the first in the store and when he emerged victorious he stopped and chatted with the media about his new toy.

As cool as the iPad is, I just don't see one in my future. When Apple comes out with a new MacBook Air 11 inch model with USB3 (instead of pokey USB2) and an 8gig RAM limit (rather than the paltry 4gig limit), I'll be first in line. That's the laptop I'm holding out for.

There are more photos from the iPad release in my archive or available from ZUMA Press.
Posted by Jack at 00:46 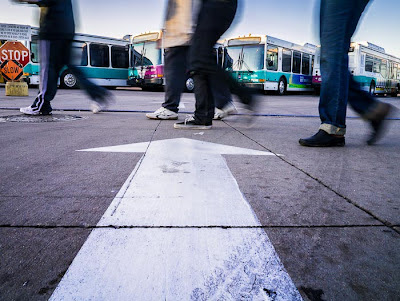 Drivers in the Amalgamated Transit Union Local 1433 walk past parked buses during their picket early Monday. They are on strike against Veolia Transportation, which provides bus service in Phoenix.

The men and women who drive the buses that crisscross Phoenix walked off the job this weekend stranding thousands of Valley residents who rely on mass transit. At a time when gas prices are approaching $4 a gallon, this particularly hurts people on the lower rungs of the socio-economic ladder and those who don't drive. Veolia, the French company that is contracted to provide bus services in Phoenix, says the drivers in Phoenix are the highest paid in the southwestern US, with an hourly wage of $22.53. What needs to be considered with that number is that Phoenix is by far the largest city in the Southwest (and 6th largest city in the US) with a commensurate cost of living. And $22.53 seems like a lot, but it works out to just over $900 a week or $45,000 a year. Firmly in the middle class and nowhere near Mitt Romney (or Newt Gingrich or Barrack Obama for that matter) money. In fact, it would take a Veolia driver more than 480 years to make what Mitt made in 2010.

The Union says they're striking to force Veolia to the negotiating table. They've been working for almost two years without a contract and they allege that the company has not been negotiating in good faith.

There was a time in this country when unions were thought to be a good thing. People of a certain age might remember the old "Look for the Union Label" ads that were a fixture on television 30 years ago. Unions brought us the 40 hour work week and the rise of the middle class. All of those manufacturing jobs that presidential candidates of both parties want to bring back? Those used to be union jobs.

But in the last 35 years or so, coinciding with the rise of the radical right, unions have become public enemies. Arizona's legislature is debating some of the harshest anti-union legislation in the country this year. Wisconsin and Ohio, rather famously, passed draconian anti-labor legislation last year. At the same time that the states have declared war on labor, the salaries and perks of corporate leaders have skyrocketed. American Corporate CEO's now make more than 470 times what their workers make. (CEOs in Germany, the UK and France, all countries with stronger labor movements and more protections for working people make only 12 - 22 times what their workers make.)

I don't have a dog in this hunt. I'm not a member of a union, I've never been a member of a union. But that kind of pay discrepancy just doesn't seem moral. And I do appreciate the 40 hour week and other benefits workers before me have secured for people working today.

There are more photos from the picket line in my archive and available from ZUMA Press. 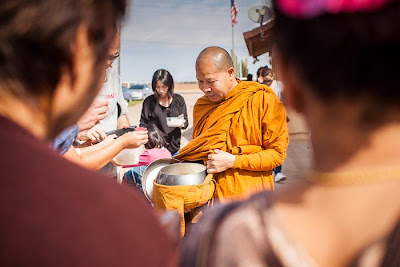 The Abbot at Wat Pa in Chandler collects food from temple goers during a Makha Bucha Day observances at the temple.

Wat Pa, a Thai Buddhist temple in Chandler, marked Makha Bucha Day today with a special service and the Thai equivalent of a church pot luck.

Makha Bucha Day is one of the most important holy days in the Theravada Buddhist tradition. It marks the day, more than 2,500 years ago, that 1,250 "Arhantas" or Enlightened Ones - all personally ordained by the Buddha - spontaneously came to hear the Lord Buddha preach. Temples (called "Wats" in Thailand), a beehive of activity in many communities, are packed with people who want to "make merit" on the holy day and participate in activities like a candle light procession or large community meal after the service. The day is a public holiday in Thailand, Cambodia, Laos and Myanmar (Burma). In Asia, the holiday is celebrated on the full moon night of the third lunar month, which usually falls in February, but this year was in March.

Wat Pa is a Thai temple, but it serves all members of the Theravada Buddhist community. People from Laos and Cambodia also attend the temple. Wat Pa's observance of Makha Bucha was today. A large crowd was at the temple to chant with the Abbot and present him with food and then partake in a picnic.

Traditional church potlucks in the US are famous for their "covered hot dishes" and casserole dishes. If there is a Thai equivalent to that it would have to be curries, Phat Kraphao (an incredibly savory dish of minced chicken or pork stir fried with lots of chiles and basil), som tum (green papaya salad - also made with lots of chiles) and of course, rice. The temple may be in Arizona, but the scents coming out of it today were straight from a Bangkok street food market.

There are more photos of Makha Bucha Day available from ZUMA Press or in my archive.