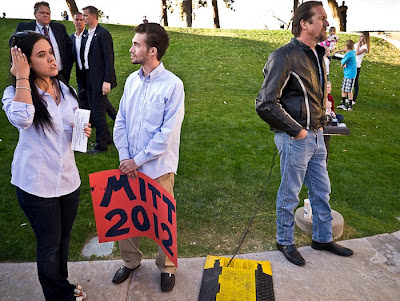 Romney campaign workers, Mesa politicians and the public wander into a Mitt Romney get out the vote rally in Mesa Monday night. 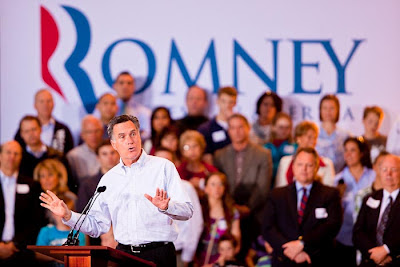 Mitt Romney speaks at his campaign rally in Mesa.

Republican Presidential front runner Mitt Romney brought his traveling road show to Mesa Monday night for a get out the vote rally. It was at least his third stop in Phoenix in six months, more than any other GOP primary candidate. Thousands of people came to the Mesa Amphitheatre to hear the richest Presidential candidate in history talk about how he would help the middle class regain the momentum that's been lost since the late 70's. He touted his experience in private business as a corporate buyout mogul as a qualification to be president.

The crowd, which was overwhelmingly white, cheered for Romney but the loudest roar of approval came when Romney, a Mormon, talked about his faith. Phoenix's East Valley suburbs, especially Mesa, are overwhelmingly Mormon and Romney was on friendly ground.

Romney's speech didn't break any new ground and was short on specifics. He would make life better for all of us, but didn't say how he would do it. Like all the Republicans on the campaign trail this year, he ridiculed the European Democrat Socialist model of governing, one that favors social safety nets over the corporate hooliganism so prevalent in the US now.

There are more photos of the Mesa rally in my archive and available from ZUMA Press.