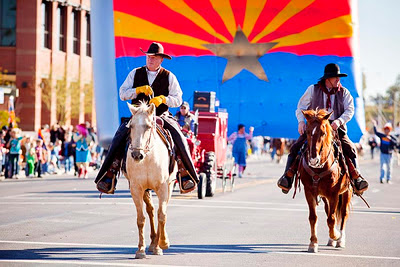 Cowboys ride their ponies down the main street (which is not named Main Street) in Buckeye Saturday morning during the Buckeye Day Parade. People from Arizona Public Service (APS) were pulling a huge inflatable Arizona flag behind the cowboy. The event was a part of Arizona's centennial celebration of statehood. Arizona became the 48th state in the union on February 14, 1912.

The state is marking its 100th birthday with parades, fireworks, mass weddings (since the centennial is on Valentine's Day) and other parties. It's a big deal, since this only comes around once every 100 years or so.

There are more photos from the parade in my archive or available from ZUMA Press. 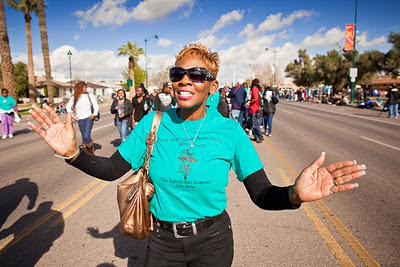 Today is Martin Luther King Jr. Day, the day the United States set aside to honor the late Dr. Martin Luther King Jr, the civil rights leader assassinated in Memphis in 1968. King is rightly remembered as the greatest civil rights leader in US history. Later in his career, from about 1965 until his death though, he was also a passionate opponent of the Vietnam War. Among his many quotes and speeches on war and peace this one stands out for me, "The bombs in Vietnam explode at home; they destroy the hopes and possibilities for a decent America." He was right too. The wars in Southeast Asia killed President Johnson's "Great Society" and set the tone for next 40 years in American politics. One side vowing not to repeat the mistakes of Vietnam, the other vowing to put Vietnam behind us and not learn from those mistakes.

For most of us, the King holiday is another day off from work. It should be day for introspection and reflection. Maybe a day to do some community volunteer work.

The are more pictures from the Mesa parade in my archive and available from ZUMA Press. 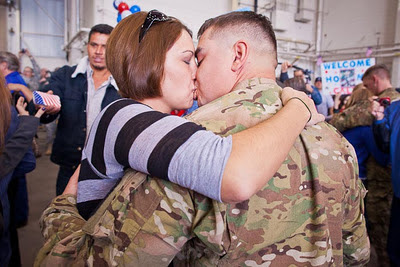 About 100 soldiers of A (Alpha) Company of the 422nd Expeditionary Signal Battalion (referred to as “Alpha 4-2-2”) of the Arizona Army National Guard came home Sunday a nearly year-long deployment to Afghanistan.

Since the military has been downsized - leaner and meaner - more war fighting responsibility has fallen on the citizen soldiers. National Guard and reserve units have been called up in the greatest number since World War II. More than 10,000 Arizona Army and Air National Guard Soldiers and Airmen have been called up to support the wars in Iraq and Afghanistan since September 2001. Almost all American soldiers have left Iraq but there are still approximately 200 Arizona National Guard Soldiers and Airmen serving on federal active duty overseas. For the soldiers and their families the end appears to be in sight as the war in Afghanistan starts to wind down in the next year.

There are more photos from the homecoming in my archive or available from ZUMA Press.

Email ThisBlogThis!Share to TwitterShare to FacebookShare to Pinterest
Labels: News 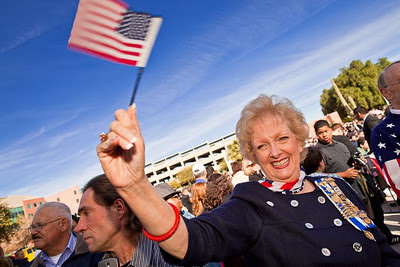 A member of the Daughters of the American Revolution welcomes the Phoenix area's newest citizens to the Chandler Multicultural Festival in Chandler Saturday. More than 140 people from 21 countries were sworn in as US citizens in an outdoor ceremony. It seems appropriate that the new citizens were sworn in on the weekend that honors Martin Luther King, a man who fought for civil rights for all Americans.

There are more photos from the ceremony in my archive or available from ZUMA Press.
Posted by Jack at 21:57

Another Day in Maricopa County Government 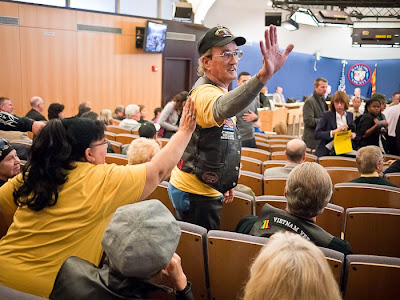 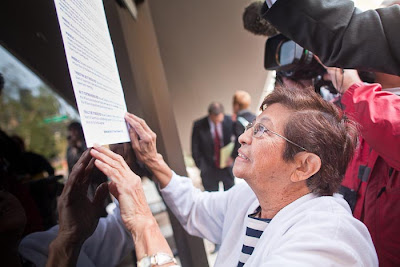 I had to cover a Maricopa County Board of Supervisors meeting this week. In most counties a "Supes" meeting (also called county commissioners in some states) is a yawn inducing exercise in government minutiae. For photographers, in some places, "supes" meetings assignments are as popular as court assignments. In others words, not at all popular. But this is Maricopa County and nothing is as it should be.

This is the county where the Sheriff arrested two of five supervisors on corruption charges, where the chief deputy (since fired) has been quoted as saying the goal was to arrest 3 of 5 to deny the board a quorum. The county where Supervisors hired a private eye to sweep their offices for listening devices, fearing the Sheriff had "bugged" them. The county where the Supervisors are suing the Sheriff's department for malicious arrest. Americans like to make jokes about "banana republics" usually thought to be small Latin American countries. But for the last six years, Maricopa County has been the prototypical banana republic.

At almost every supes meeting, a group of human and civil rights activists opposed to Sheriff Joe Arpaio picket the meeting and speak out against the Sheriff whenever the MCSO is on the agenda. It doesn't matter why he's on the agenda, his opponents will use the opportunity rail against him. This week the Sheriff's department was on the agenda for a relatively routine budget adjustment. His opponents were there and monopolized the first hour of the meeting. Some were critical of perceived racism by MCSO deputies on the immigration sweeps. Others spoke out against the way his jails are run, especially after a video was released showing detention officers repeatedly shocking a man, an unarmed veteran with a history of mental health problems, with a taser then locking him in "safe" cell (basically a padded room), where he went into cardiac arrest and eventually died.

Lately the other side of the issue has been showing up, speaking out in support of the Sheriff. At first it was just a couple of local Tea Partiers. Now, members of the Oath Keepers are attending the meetings to support the Sheriff.

Thanks to the tit for tat back and forth protests, meetings that should take 45 minutes to an hour take two or three hours to get through. But they are sure are entertaining. This week the anti-Arpaio people spoke out against the Atencio death and then a the pro-Arpaio Tea Party and Oath Keepers spoke in support of the sheriff. Finally, Randy Parraz, the public face on the historic recall of Russell Pearce, spoke out against the Sheriff. Parraz' supporters stood in silent support, the Tea Partiers started shouting and it was off to the races. The stand off ended when Parraz and his supporters walked quietly out of the room, but not before an Oath Keeper (top photo) lunged towards the human rights' activists. He was pulled back to his seat by the woman, also a Sheriff's supporter, behind him.

When they got outside, members of Citizens for a Better Arizona taped a notice to the door of the Supervisors' building that they intend to put the Sheriff's department back on the agenda in the two weeks time. I can hardly wait.

Praying for the Legislature 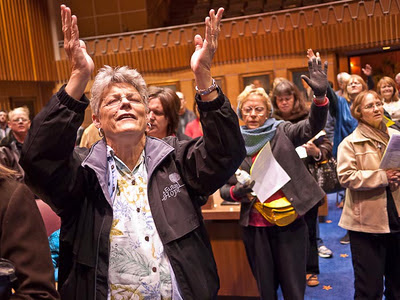 People gather in the Arizona State Senate chamber Monday to pray for a fruitful and productive legislative session. The "Prayer Walk" was organized by the Center for Arizona Policy, a right wing think tank. The Prayer Walk was just one of several activities that took place at the State Capitol Monday before the Governor's State of the State address.

I like photographing politics and the political process and I've covered almost every State of the State since 1999, when we moved to Phoenix. There's usually a lot to photograph.

Special interests groups congregate on the Capitol to press their issues. The CAP Prayer Walk was the first event Monday morning.

There were also rallies by Planned Parenthood in support of pro-choice and women's health issues (only 3% of Planned Parenthood's services are abortion related, most of the rest are related women's health needs), there were Tea Partiers rallying for lower taxes, smaller government and greater gun rights and a small number of conservative Catholics rallying against abortion rights.

Governor Brewer delivered a rather short State of the State speech in the afternoon. She promoted the state's centennial (Feb 14, yes Arizona became the 48th state on Valentine's Day in 1912), and took credit for righting Arizona's Ship of State.

I was at the Capitol for about 10 hours, from well before dawn for the Prayer Walk, until late afternoon for Democrats' response to the Governor's speech. I shot way too much - I filled nearly 3 eight gigabyte compact flash cards. That's not unusual for me at something like this. There was a lot to photograph.

Then there are the State Senate and House chambers. They are very dark, cave like really. The base exposure is about 1/60 of a second at 2.8 and ISO 3200. Factor using a 300mm lens and although I shot a lot, I only archived about ⅓ of that because many of the photos were soft from movement (both the camera and the subject) and some were out of focus. In others, the subjects had their eyes closed or their hands were in front of their faces or there were other issues. So 24 gigabytes quickly gets winnowed down to 8 gigs.

Thanks to the miracle that is Adobe Photoshop Lightroom though, the editing went pretty quickly. It took me just about 3 hours to ingest, sort through, caption, tone and transmit the photos.

There are more photos from the State of the State in my archive.