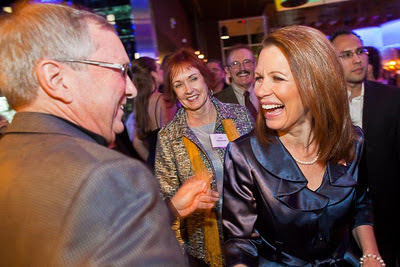 Congresswoman and GOP Presidential hopeful Michele Bachmann (R-MN) attended a Politics on the Rocks mixer in Scottsdale last night. The event was held at The Mint, a former bank (hence the name) now an upscale restaurant and club in downtown Scottsdale. Politics and the Rocks is a networking group for conservative Republicans, Bachmann was very warmly received by the crowd.

I only had about 10 minutes to photograph Bachmann. She arrived at about 7:15 and I had to leave by 7:25 to make deadline. Sometimes things just work out that way.

There are more photos of Bachmann working the crowd in my archive or available from ZUMA Press.