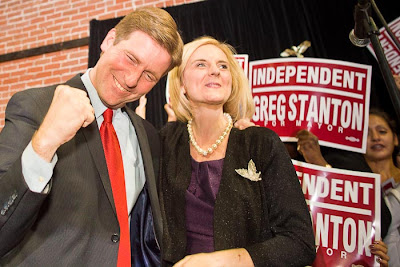 In Mesa, long serving Senate President Russell Pearce was recalled, losing to Jerry Lewis, also a conservative Republican. Pearce was the author of SB 1070, one of the toughest anti-illegal immigration laws in the country, and other anti-immigration efforts. He sponsored numerous bills to loosen Arizona's minimal gun control laws and tax cutting legislation. He was a darling of the Tea Party and one of the most conservative people in a very conservative state senate. Lewis' campaign was built around one simple issue: he wasn't Russell Pearce. He is in step with Pearce on many issues, but this race revolved around personality and Lewis was the winner.
Posted by Jack at 17:14