...What It Is, Is Increasingly Clear 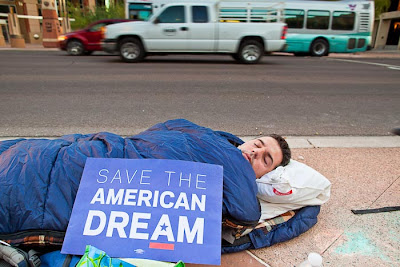 An OccupyPhoenix protester sleeps on the sidewalk in front of Cesar Chavez Plaza in downtown Phoenix Monday morning.

With apologies to Stephen Stills. The original lyric "For What It's Worth" is "There's something happening here, What it is ain't exactly clear." That song and those lines have been played and recited a lot by the mainstream media as they grapple with covering the Occupy movement and the movement's goals.

The movement's diffuse nature and their dedication to open democracy confuses people used to covering the Tea Party, which say what you will, is disciplined.

Spend any time with Occupy protesters though and it's very clear what they want.

It boils down to economic justice. They're angry, especially at banks but also other large corporate interests that pocket millions and billions in profits while the middle class of the US shrinks and the gap between the rich (the 1%) and everyone else (the 99%) grows ever wider.

They're angry that corporate executives in the US make millions while fattening the bottom line of their corporations by laying off and cutting the pay of US workers.

They're angry that health care in the US has become out of reach to all but the richest. That the super rich from developing economies like India, South Africa and Thailand come to the US for medical care, while middle class and those that can afford to travel from the US go to India, South Africa and Thailand for health care because the same procedures are out of reach here.

(True fact: a colonoscopy in Thailand costs about $500 and includes a night in a private hospital room, same procedure in the US is about $1700. And it's out patient.)

They're angry that there are no jobs, either for the laid off victims of the Great Recession, or the young people leaving college now or the veterans returning home after fighting for our country.

The mystery isn't "what's happening here?" but why it didn't happen sooner.

Some pundits have compared the Occupy protesters to the other populist movement of this century, the Tea Party. The only similarity I see is the anger.

The differences are more pronounced. The Occupy protests are more diverse. Protesters are young and old. Employed and unemployed. Black, White, Hispanic, Native American and Asian. It's not, as some have said, all "hippies."

Where the Occupy protesters are diffuse and seem to be unfocused, the Tea Party stays on message and marches in lockstep politically.

There are more photos from the Occupy Phoenix protests in my archive or available from ZUMA Press.