The (political) Elephant in the Room 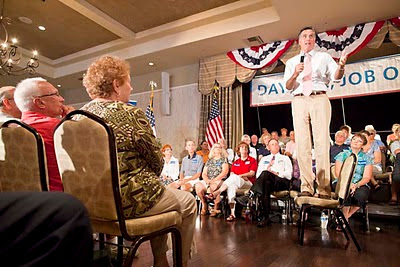 Mitt Romney was the first of the 2012 GOP Presidential hopefuls to bring the campaign to Arizona this week when he hosted a “Town Hall” style event in Sun Lakes, an upper middle class retirement enclave southeast of Phoenix. There was no podium or mic stand in the room, so Romney jumped on a chair and spoke for about 30 minutes before taking questions for another 30 minutes. At the same time that Romney was meeting voters in Sun Lakes, Tea Party darling Michele Bachmann was across town courting Maricopa County Sheriff Joe Arpaio in Phoenix.
The room, in a gated country club community, was packed. Most of the attendees were retirees but there were a few working age people and a couple of kids. They were very receptive to Romney’s promises to roll back regulations on industry and business and repeal the health care reform bill passed by Congress in 2010. He disputed charges made one person in the crowd that the Massachusetts health care bill Romney signed while Governor of the state is the basis for the health care bill passed by Congress in 2010.
One of the things I found interesting was that several people asked Romney what he would do to curb the powers of unions but no one asked what he would do to curb the power of corporate interests.
There are more photos of Romney’s meeting in my archive.
Posted by Jack at 12:43