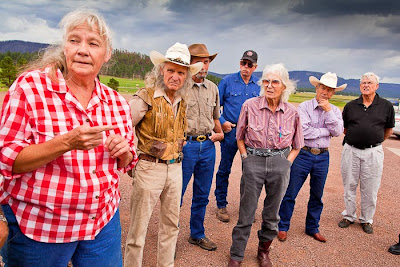 I was up in Eagar and Alpine last week working on stories about the aftermath of the Wallow Fire, the largest wildfire in Arizona history.
The fire ripped through the White Mountains, from Greer in the west to Alpine and Nutrioso in the east, and from the edge of Eagar in the north to south of Hannigan Meadow. It was a massive blaze, its scars, large swaths of scorched countryside, will be visible for at least a generation.
At Luna Lake, east of Alpine, a group of ranchers met with US Congressmen Steve Pearce, of New Mexico and Paul Gosar, of Arizona, both Republicans. There was something about their faces I really liked.